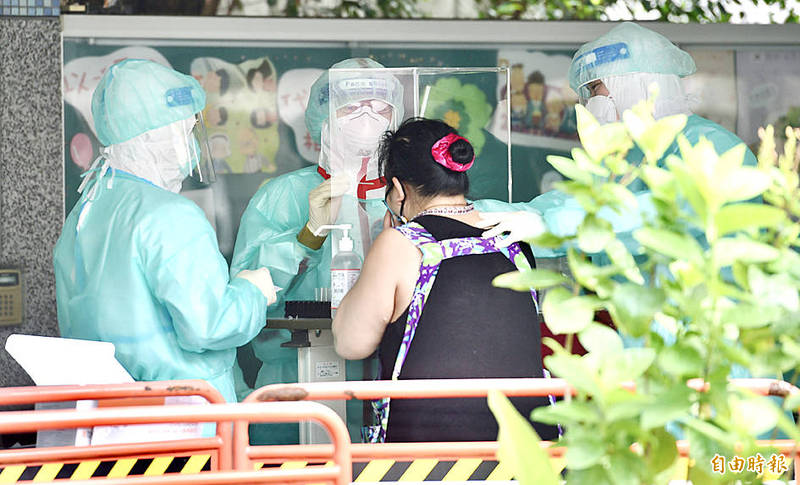 TESTING EVERYWHERE? Screening is to be conducted on every worker linked to markets in Taipei and New Taipei City, with stations to be set up near the premises

The center announced that a level 3 COVID-19 alert has been extended to July 12, with all restrictions to remain in place, while six control measures for enhanced implementation include a special health monitoring program for daily necessities — mainly at markets.

Minister of Health and Welfare Chen Shih-chung （陳時中）, who heads the center, said that in response to a cluster of 54 infections linked to Taipei Agricultural Products Marketing, the CECC, the Council of Agriculture （COA）, the Taipei City Government and the company at a meeting on Tuesday discussed control measures to help prevent the virus’ spread.

“The COA insists that starting from midnight [today], people who do not have a negative COVID-19 test result will be banned from entering the wholesale markets in Taipei and New Taipei City,” Chen said.

A special screening program was launched to test every worker linked to the markets, he said, adding that the CECC has suggested that testing stations be set up as close to the markets as possible to increase efficiency and that workers be tested until they are vaccinated.

The Taipei City Government is to conduct rapid tests and polymerase chain reaction （PCR） tests on all personnel at the markets, Chen said.

The CECC suggested that to save time, only PCR tests be conducted, which would also prevent false negatives and false positives, but it respects the city’s decision, as long as it can achieve its goal, he said.

It is crucial for the Taipei Department of Health to conduct precise contact tracing to identify close contacts of confirmed cases and isolate them to help prevent transmission, he said.

As truck drivers and freight workers only enter the markets for short periods, the CECC has asked Taipei Agricultural Products Marketing to provide a list of such personnel, which it would use to direct local governments to conduct testing, contact tracing and vaccinations according to household registration, Chen said.

Responding to Taipei Mayor Ko Wen-je’s （柯文哲） announcement on Tuesday that the city would vaccinate all personnel at the wholesale markets, Hospital and Social Welfare Organizations Administration Commission Director Wang Pi-sheng （王必勝）, who visited the markets with Chen, said that vaccination is a “good weapon” for long-term control, but not a “panacea.”

Wang, who was head of a local command center for two cluster infections in Taoyuan and Miaoli County, wrote on Facebook that “contact tracing, isolation, screening and separating” people according to infection risks is necessary to handle clusters.