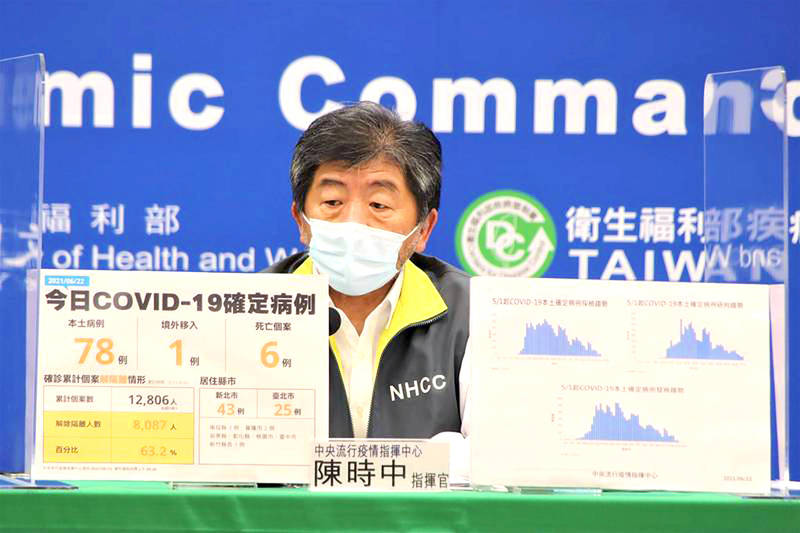 Minister of Health and Welfare Chen Shih-chung speaks at a news conference in Taipei yesterday. Photo courtesy of the Central Epidemic Command Center

EXTREMELY REGRETTABLE: The CECC also reported six deaths — three men and three women who were aged 50 to 90 and who all had underlying health conditions

The Central Epidemic Command Center （CECC） yesterday reported 78 new local COVID-19 infections and six deaths, while also announcing that all people who are placed under home isolation or home quarantine must be tested before ending isolation or quarantine, effective immediately.

Minister of Health and Welfare Chen Shih-chung （陳時中）, who heads the center, said the locally transmitted cases are 35 males and 43 females, aged under five to over 90, and they began having symptoms between Monday last week and Monday.

Most of the cases were reported in New Taipei City and Taipei, with 43 and 25 cases respectively, he said, adding that there were three cases in Nantou County, two in Keelung, and one each in Taoyuan and Taichung, as well as Hsinchu, Miaoli and Changhua counties.

The six deaths were three men and three women who were aged 50 to 90 and who all had underlying health conditions, Chen said.

Centers for Disease Control Deputy Director-General Philip Lo （羅一鈞）, deputy head of the CECC’s medical response division, said that among the deaths, two were residents of a nursing home in Taipei’s Shilin District （士林）, where a cluster of 47 infections was confirmed this week.

The two residents both had hypertension and were on dialysis, he said, adding that one was a woman in her 50s who was the first confirmed case at the facility.

She began having symptoms on June 8 and was hospitalized the next day, he added.

The other resident was a man in his 90s who tested negative on Wednesday last week, but had difficulty breathing on Saturday and was taken to an emergency room, Lo said.

The policy is to take effect immediately and it is aimed at preventing the Delta variant, which was first identified in India, from being imported to Taiwan, he said.

There are about 5,000 people in home isolation and 9,000 in home quarantine, and an average of about 1,000 people are expected to be tested per day, Chen said.

The CECC has been discussing the level 3 alert with public health experts and local governments, and it expects to announce today whether it plans to extend the alert beyond Monday next week, he said.