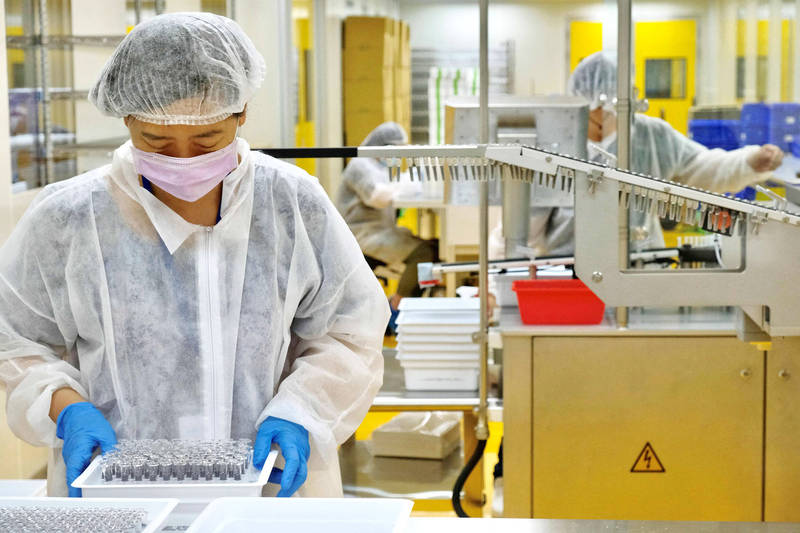 OPPORTUNITY: The company aims to sell its product soon, as enterovirus vaccines are not available anywhere but China, where firms are only marketing their vaccines locally

The company would compile a final analysis report as soon as possible, and apply for the new drug certificate from domestic and foreign drug authorities in the third quarter, Medigen said in a Taiwan Stock Exchange filing yesterday.

Its phase 3 trials were conducted in Taiwan and Vietnam with 3,049 participants ranging from two months old to six years old, Medigen said.

The company enrolled its first participant for the phase 3 trials in April 2019 and completed the enrollment of all participants in December that year, it said.

Participants were recruited in a randomized, double-blinded and placebo-controlled study, it added.

The number of infants from two months to six months old accounted for 25 percent of all participants, it said.

As for immunogenicity, results showed that the seroprotection rates 28 days, six months and one year after two EV71 vaccination doses were higher than health authorities’ requirements, it said.

In terms of efficacy, Medigen said that the experimental drug offered statistically significant protection against the enterovirus under the Poisson regression model.

The company hopes its vaccine can hit the market soon, as there are no enterovirus vaccine products available in other parts of the world, except for China.

At present, only three Chinese manufacturers have launched enterovirus vaccines to be marketed locally in China, Medigen said.

Those vaccines are suitable for children over the age of six months, it said.

In 2018, the market sales of China’s EV71 vaccines reached more than NT$30 billion （US$1.08 billion）, and about 21 million doses were sold per year on average in the past three years, Medigen said.

The company on June 10 reported positive results from an interim analysis of phase 2 trials for its COVID-19 vaccine. It has applied to the Food and Drug Administration for emergency use authorization and is preparing to conduct phase 3 trials abroad.