《TAIPEI TIMES》 Taiwan in Time: The protector of carpenters 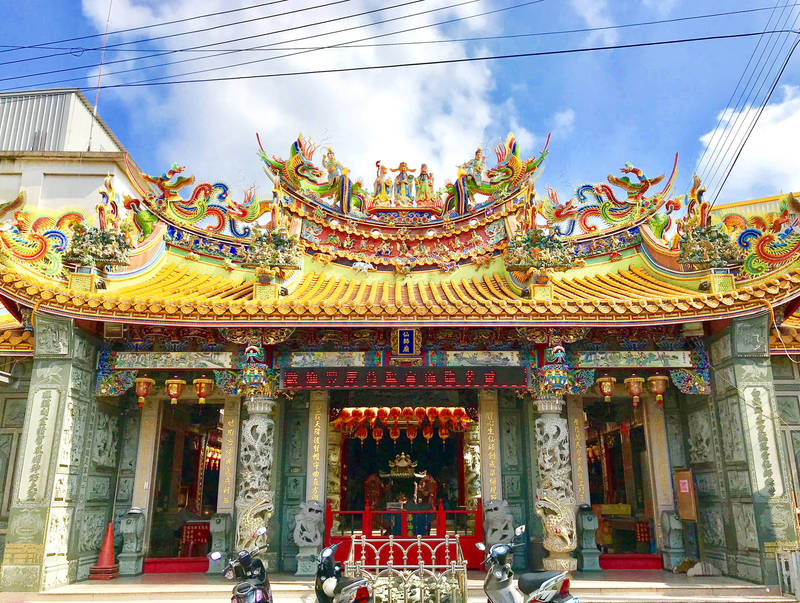 Taichung’s Qiaoshengxianshi Temple is one of the first in Taiwan to have Lu Ban as its principal deity. Photo courtesy of Wikimedia Commons

Qiaoshengdadi, or Lu Ban, the god of craftspeople, celebrated a quiet birthday last week as its main temple’s unprecedented 60-day procession was cut short by the outbreak

Taichung’s Qiaoshengxianshi Temple （巧聖先師廟） was halfway through completing the longest religious procession in Taiwan’s history when the outbreak struck.

The 60-day procession through 17 counties and municipalities would have concluded last Monday on principal deity Lu Ban’s （魯班） birthday. They had just entered Hualien when they received instructions through divination blocks to head home.

Lu Ban, the god of craftspeople, had apparently appeared in the temple director’s dreams last year and expressed his desire to travel across Taiwan, which led to him organizing the pilgrimage through 172 temples. Lu Ban was a famous carpenter during China’s Spring and Autumn Period, who is popularly credited （often incorrectly） for inventing countless items, including the saw and a glider used to attack enemy fortresses. His mother reportedly invented a chalk line tool commonly used in carpentry, and his wife devised China’s first umbrella.

There are at least 30 temples worshipping Lu Ban in Taiwan, and carpentry associations still pay special homage to him today. The Taipei Carpenter Vocational Association Web page states, “The tools that Lu Ban is credited for inventing are still used today, and therefore he is worshipped as the ancestor of all craftspeople.”

Lu Ban was worshipped in China as early as the Tang Dynasty, but the first temple dedicated to him as the god of craftspeople didn’t appear in Taiwan until the Qing Dynasty.

Chiang Ming-hsiung writes in “The Qiaoshengxianshi Temple and Dongshi’s society during the Qing Dynasty” （巧聖仙師廟與清代東勢地方社會） that Lu Ban was previously worshipped in some places in Taiwan as the god of water who protects sailors at sea.

Since several of Lu Ban’s legendary feats include helping soldiers survive disasters at sea during wartime, and some Han settlers from China brought effigies on their ships to ensure a safe journey.

By the Qing Dynasty, he had become one of the main deities for military craftspeople, who were one of the few Han groups legally allowed to operate in the forested Aboriginal areas along the frontier since they needed wood to build warships.

One such group was encamped in the western district of Dongshi in Taichung. Due to the frontier ban, the craftspeople had exclusive access to the lucrative camphor forests, and over the decades they increasingly turned to camphor production for profit. The ban didn’t stop land-hungry Han settlers from gradually encroaching into Aboriginal land. In Dongshi, the military even openly recruited their brethren from the east to farm the area and assist them with their work.

The military also employed Qing-friendly Aborigines as guards and guides against hostile groups further to the west. They often mistreated and exploited these people, leading to further discord between the two groups. Aborigines often attacked Han camps and settlements in revenge, and much blood was shed in this area during the 1760s and 1770s.

Facing increasing pressure, some workers returned to China to obtain a statue of Qiaoshengxianshi for their protection. Commander Liu Chi-tung （劉啟東）, who hailed from Guangdong Province, organized more than 100 carpenters in 1775 to build the Qiaoshengxianshi Temple. It was one of the first places of Taoist worship in the area.

Chiang writes that due to economic conditions, this first iteration was probably a quite rudimentary structure. The frontier was later pushed east and Dongshi became official Qing territory, upon which Han settlers poured in and prospered. In 1833, a much larger new temple was built, which also served as an official meeting place for military craftspeople in the area.

Until 1965, the temple remained the only one in Taiwan to primarily worship Qiaoshengxianshi. But that doesn’t mean the deity wasn’t popular. Numerous “Lu Ban Associations” across the nation formed by carpenters that regularly worshipped him. Lu Ban worship in Tamsui can be traced back to at least 1919, for example, but a proper temple wasn’t built until the 1970s.

According to the temple, however, its rapid expansion was due to a miracle: in the 1960s, a struggling wood dealer from Taipei made his way to Dongshi to boost his fortunes. He pledged to renovate the temple if his wishes came true, and that year the price of wood surged. The dealer kept his promise and gathered a number of craftspeople to complete the task, which inspired the workers to start building Qiaoshengxianshi temples in their towns.

The original Qiaoshengxianshi temple collapsed during the deadly 921 Earthquake, and was rebuilt in 2004. Per Lu Ban’s instructions, the temple will resume its procession from Hualien after the outbreak is contained.