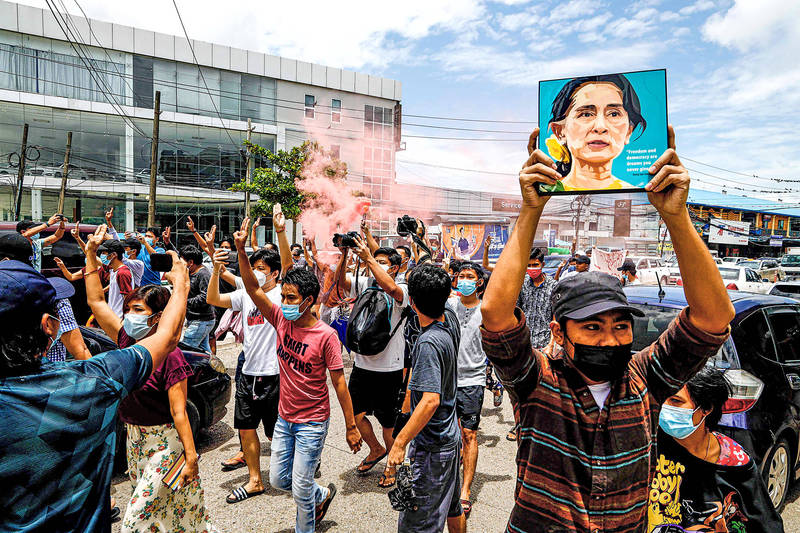 A protester holds up a painting of Aung San Suu Kyi to mark her birthday during a demonstration against the military coup in Yangon, Myanmar, yesterday. Photo: AFP

In a rare move, the UN General Assembly on Friday condemned Myanmar’s military coup and called for an arms embargo against the country in a resolution that demonstrated widespread global opposition to the junta and demanded the restoration of the country’s democratic transition.

Supporters had hoped the 193-member General Assembly would approve the resolution unanimously by consensus, but Belarus called for a vote.

The measure was approved with 119 countries voting “yes,” Belarus voting “no” and 36 countries abstaining, including Myanmar’s neighbors China and India, along with Russia.

UN Special Envoy to Myanmar Christine Schraner Burgener told the General Assembly after the vote that “the risk of a large-scale civil war [is] real.”

“Time is of the essence,” she said. “The opportunity to reverse the military takeover is narrowing and regional threat increasing.”

The resolution was the result of lengthy negotiations by a so-called Core Group including the EU and many Western nations, and the 10-member ASEAN, which includes Myanmar.

A UN diplomat said there was an agreement with ASEAN to seek consensus.

However, in the vote, its members were divided. Myanmar, whose UN ambassador supports the ousted democratic government, voted “yes” along with Indonesia, Singapore, Malaysia, Vietnam and the Philippines, while Thailand, Laos, Cambodia and Brunei abstained.

Even though the resolution did not get the overwhelming support its backers hoped for, the action by the General Assembly, while not legally binding, reflects international condemnation of the Feb. 1 coup that ousted Burmese State Counselor Aung San Suu Kyi’s party from power, and put her under arrest along with many government leaders and politicians, as well as strong opposition to the military crackdown on protesters demanding an end to the army’s takeover.

The resolution’s approval follows calls for more aggressive UN action by many countries and Burmese UN Ambassador Kyaw Moe Tun, who has been charged with treason by the military junta.