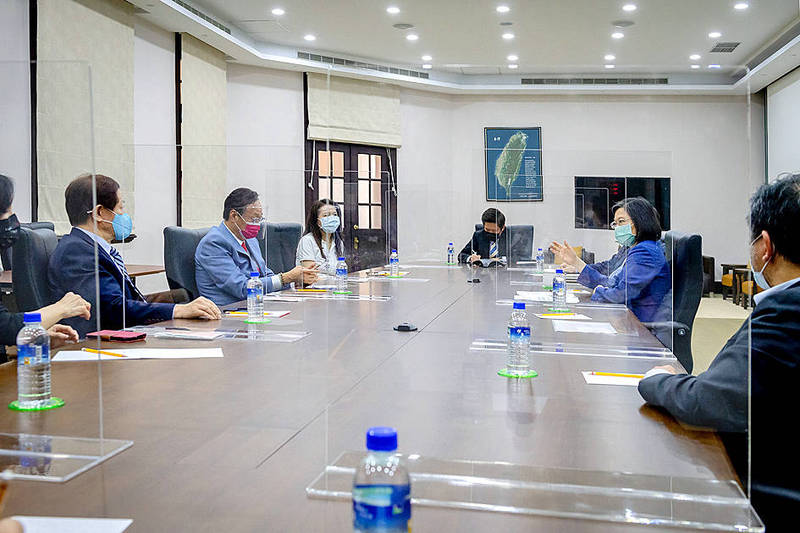 CHANGE IN TUNE: After a meeting with Hon Hai’s Terry Gou and TSMC’s Mark Liu, President Tsai instructed the Executive Yuan to support their procurement efforts

The government is planning to authorize two of Taiwan’s top technology firms to represent it in negotiations to purchase up to 10 million doses of the Pfizer-BioNTech COVID-19 vaccine.

Taiwan Semiconductor Manufacturing Co （台積電, TSMC） and the Hon Hai Precision Industry Co （鴻海精密）-affiliated YongLin Charity and Education Foundation would be allowed to negotiate the purchase of up to 5 million doses each, with the condition that the vaccines must be procured from the German company and government agencies would be tasked with distributing the doses, Executive Yuan spokesman Lo Ping-cheng （羅秉成） said yesterday.

Lo gave little indication as to how likely the efforts were to succeed, but he described how the process would work should a deal be finalized.

Delivery dates for the vaccines would be based on “the status of the nation’s vaccine procurement efforts and the capacity of the manufacturer,” Lo said.

The process would follow the precedent set by Japan’s donation of 1.24 million doses of the AstraZeneca COVID-19 vaccine earlier this month, Lo said.

Following international standard practice, the government would provide a liability disclaimer to the manufacturer and assume full responsibility for the distribution of the doses, he said.

Meanwhile, with the assistance of the German government, Taiwan would continue its own negotiations with BioNTech to meet domestic vaccine demand, Lo said.

However, due to an ongoing shortage of vaccines, officials have changed their tune and expressed willingness to cooperate with private procurement efforts, as long as they meet regulatory standards.

Ahead of the announcement yesterday, Gou on Facebook expressed frustration over what he said was the government’s continued hedging despite public support for his efforts.

“If there are no breakthroughs on the vital issues, then we are just spinning in circles,” Gou said. “Unlike other types of donations, vaccine donations touch on a specific set of legal obligations. The government must clearly state its position so that the donor can negotiate the quantity of the order and delivery time with the manufacturer.”

Gou requested a meeting with President Tsai Ing-wen （蔡英文） on the issue, saying: “Without a clear statement from you [Tsai], the vaccine procurement process cannot truly begin.”

The Presidential Office said in a statement released after the meeting that Tsai expressed gratitude to Gou and Liu, and that she has instructed the Executive Yuan to provide full support to their efforts, helping them complete the authorization process as quickly as possible.

The three agreed that the doses must be “manufactured and packaged by the original manufacturer, and delivered straight to Taiwan,” the office said.