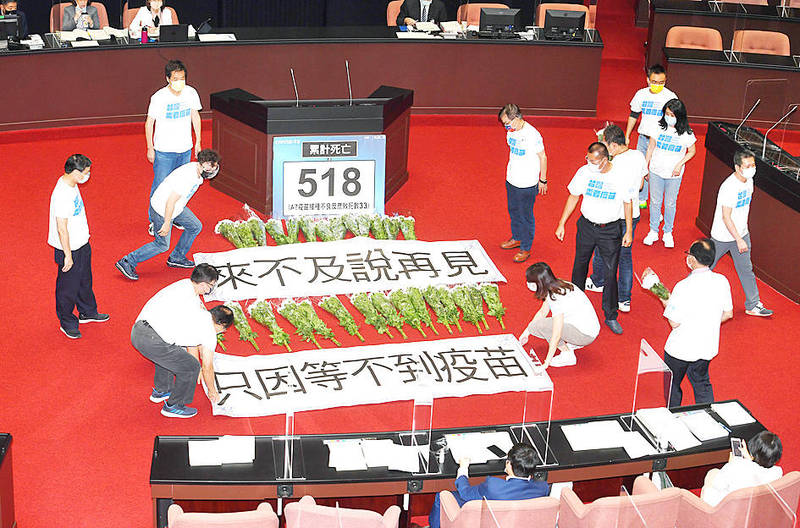 Chinese Nationalist Party （KMT） legislators yesterday lay banners next to bouquets of white chrysanthemums on the legislative floor in Taipei to commemorate those who have died during the COVID-19 pandemic. Photo: CNA

TURNED DOWN: Various KMT proposals were not passed in the DPP-controlled legislature, including to pay NT$2.8 million to family members of those who died of COVID-19

Legislators yesterday approved a NT$259.49 billion （US$9.33 billion） special budget for COVID-19 relief, the fourth such measure to fund epidemic prevention efforts and provide subsidies to people and businesses affected by the COVID-19 pandemic.

The Legislative Yuan on the last day of its extraordinary session slashed NT$510 million from the NT$260 billion approved by the Executive Yuan.

The amount that was cut came out of NT$800 million proposed by the National Communication Commission, part of which was to pay for fees from a short message service （SMS） contact tracing system launched by the Executive Yuan last month.

When the system, which uses QR codes to send text messages with contact tracing information to health authorities, was announced, the Executive Yuan said that all SMS texts sent would be free, as telecoms would not charge the government.

Legislators said the commission did not need the extra funding if there were no additional costs for the texts.

The government would raise debt to fund the relief package, the Executive Yuan said in a statement.

A number of KMT proposals were turned down in the legislature, where the Democratic Progressive Party （DPP） has a majority, including proposals to purchase 40 million doses of WHO-certified vaccines within a month, and to review the contracts and prices signed by the government to procure domestically developed vaccines.

The KMT caucus’ calls to review emergency use authorization approvals for vaccines, establish a commission for compensation, and issue NT$10,000 in cash subsidies per person, NT$2.8 million to family members of those who have died from the virus and NT$150,000 to people confirmed to have contracted the disease were also rejected.

During the session, KMT lawmakers brought bouquets of white chrysanthemums, which they laid on the legislative floor in commemoration of those who died from COVID-19.

KMT Legislator Cheng Li-wen （鄭麗文） said that 518 people have died from COVID-19 in Taiwan, and their deaths would have been preventable had the government procured sufficient vaccines.

Had the government’s lax quarantine policy for returning pilots not paved the way for the most recent outbreak, and had there been sufficient hospital beds, medical equipment and medicine, so many deaths could have been prevented, she added.

The KMT caucus’ proposals are what the people need and yet they have all been turned down, she said, adding that had the government spent NT$40 billion to inoculate the entire nation, legislators would not have to approve an additional NT$400 billion on pandemic relief funds.