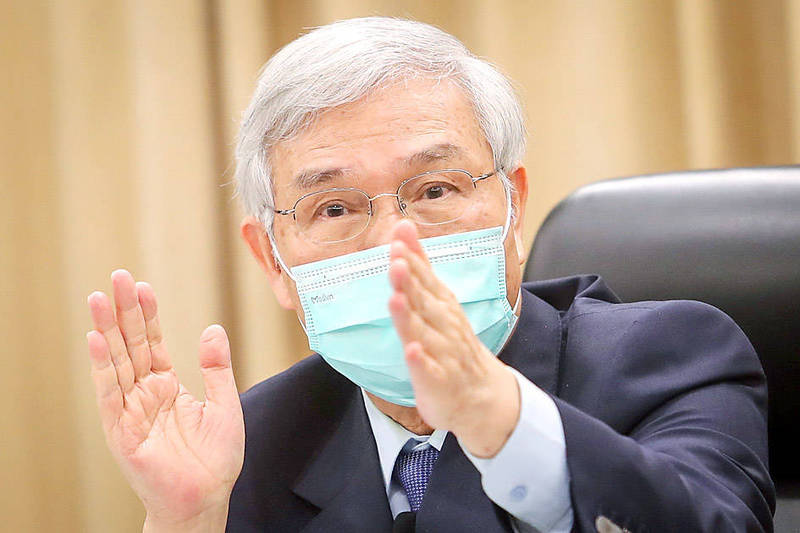 Central bank Governor Yang Chin-long speaks at a news conference at the bank in Taipei on March 18. Photo: CNA

The central bank yesterday kept its policy rates in place, while raising its forecast for GDP growth this year from 4.53 percent to 5.08 percent, saying that this month’s COVID-19 outbreak has had little negative effect on exports and private investment, although uncertainty lingers.

Despite a vibrant economy, the central bank said it was not worried about inflation, nor was it inclined to further tighten credit, as the level-3 COVID-19 alert and coming property tax hikes have already helped cool the real-estate market.

Central bank Governor Yang Chin-long （楊金龍） said he agreed with the US Federal Reserve that current inflationary pressures are temporary and would start to subdue next quarter when the low base effect tapers off.

It is the first time that the central bank has moved the quarterly media briefing online after its board members met in three separate rooms to avoid infection risks.

The central bank is looking at an annual increase of 1.58 percent in consumer prices this year with the core consumer price index, a more reliable long-term price tracker because it expels volatile items, clocking a 1.1 percent gain.

Although consumer activity has come to an abrupt halt, exports and private investment continue to pick up as the US and Europe reopen their economies, favorable for global trade, Yang said.

Exports this quarter are likely to rise by more than 30 percent from a year earlier, riding on strong inventory demand worldwide for tech and non-tech products, Ministry of Finance data showed.

The governor reiterated that he was uncomfortable about increasing interest rates soon, as even talking about it could attract hot money, while peers around the world maintain quantitative easing to support their economies.

The New Taiwan dollar has climbed to a near three-decade high against the US dollar this year on the back of robust exports and relatively generous dividend payouts by local listed firms, Yang said.

Yang said he understood that tight movement restrictions were responsible for sluggish property transactions, and the market could regain traction once the level 3 alert is lifted.

“The central bank will keep a close watch, and take quick action to rein in property price hikes whenever necessary,” he said, as the effect of selective credit controls is not yet evident.

However, the governor said he has been pleased with ultra-low instances of bad loans linked to mortgage and construction financing.