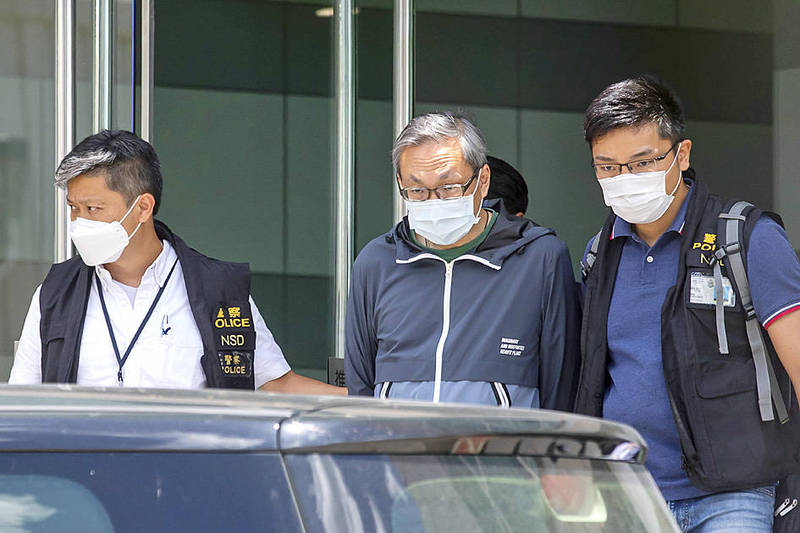 STATE TARGETS: In a letter to its readers, ‘Apple Daily’ said that many items were taken in the raid, including 38 computers with ‘considerable’ journalistic material

Hong Kong police yesterday used the Beijing-imposed National Security Law to arrest five editors and executives of a pro-democracy newspaper on charges of colluding with foreign powers — the first time that the legislation has been used against the media in yet another sign of an intensifying crackdown by Chinese authorities in the territory.

Police said they had evidence that more than 30 articles published by the Apple Daily played a “crucial part” in what they called a conspiracy with foreign countries to impose sanctions against China and Hong Kong.

Apple Daily said in a statement that the move left it “speechless,” but it vowed to continue its reporting.

The newspaper has long been one of the most outspoken defenders of Hong Kong’s freedoms, and in recent years has often criticized the Chinese and Hong Kong governments for walking back promises that the territory could retain those freedoms for 50 years after the former British colony was handed over to China in 1997.

As a result, the newspaper has found itself a frequent target.

Apple Daily founder Jimmy Lai （黎智英） is serving 20 months in prison after being convicted of playing a role in unauthorized protests in 2019.

Protests grew to include calls for broader democratic freedoms, but the movement only appeared to harden Beijing’s resolve to limit civil liberties in the territory, including by imposing the national security legislation used in yesterday’s arrests.

The legislation outlaws secession, subversion, terrorism and foreign collusion, and has been used to arrest more than 100 pro-democracy figures since it was first implemented a year ago, with many others fleeing abroad.

The result is that it has virtually silenced opposition voices in the territory — and drawn sanctions from the US against Hong Kong and Chinese government officials.

Trading in shares of Next Digital was halted yesterday morning at the request of the company, filings with the Hong Kong Stock Exchange showed.

In an apparent show of force, more than 200 police officers were involved in the search of Apple Daily’s offices, and the government said that a warrant was obtained to look for evidence of a suspected breach of the national security legislation.

Apple Daily published a letter to its readers, saying that police had confiscated many items during the search, including 38 computers that contained “considerable” journalistic material.

“Today’s Hong Kong feels unfamiliar and leaves us speechless. It feels as though we are powerless to stop the regime from exercising its power as it pleases,” the letter read. “Nevertheless, the staff of Apple Daily is standing firm. We will continue to persist as Hong Kongers and live up to the expectations so that we have no regrets to our readers and the times we are in.”

Hong Kong Secretary for Security John Lee （李家超） told a news conference that police would investigate those arrested and others to establish whether they had assisted in instigating or funding the offenses.

He said that the police action against the Apple Daily editors and executives was not related to “normal journalistic work.”

“The action targeted the use of journalistic work as a tool to endanger national security,” he said.

In a chilling warning, he said that anyone working with the “perpetrators” would “pay a hefty price.”

“Distance yourself from them, otherwise all you will be left with are regrets,” he added.

China’s Office for Safeguarding National Security of the Central People’s Government in the Hong Kong Special Administrative Region said yesterday that it supported the police action, adding that while Hong Kong’s Basic Law guarantees the freedoms of speech and press, those rights cannot undermine the “bottom line of national security.”

“Freedom of the press is not a ‘shield’ for illegal activities,” the liaison office said.

Minister of Foreign Affairs Joseph Wu （吳釗燮）, who regularly speaks out against the degradation of freedoms in Hong Kong, took to Twitter to decry the raid.

“Authoritarianism is waging a brutal war on @appledaily_hk, a desperately endangered symbol of freedom” in Hong Kong, he wrote.

“I’m out of words to describe my anger & sadness at witnessing this tragedy,” he added.

After Beijing imposed the national security legislation in Hong Kong, it has been able to further sabotage the territory’s democracy, and now it can even arrest media executives, Independent Legislator Freddy Lim （林昶佐） said.

No matter how hard it tries to renew its national image, Beijing only exposes its own evil nature through such autocratic actions, he said.