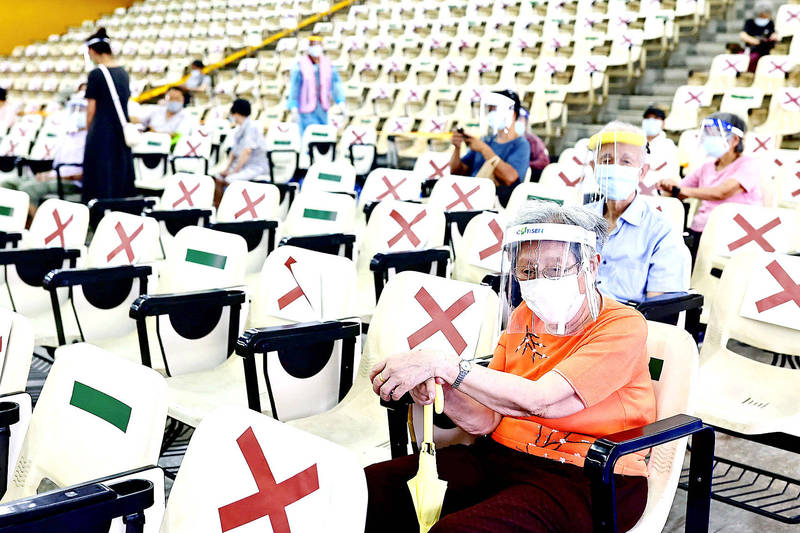 People sit in an observation area after being inoculated against COVID-19 at an auditorium in New Taipei City on Wednesday. Photo: Ann Wang, Reuters

NEW BATCH: The ‘Liberty Times’ has reported that 240,000 doses of the Moderna vaccine are to arrive in Taiwan today, following the first 150,000 doses that arrived in May

Of the local cases, 100 are male and 75 are female, with an onset of symptoms between June 3 and Wednesday, the center said.

New Taipei City had the most local infections, with 87 cases, followed by Taipei with 34 cases, Miaoli County with 31, Hsinchu County with 10, Taoyuan with seven, and two each in Hualien County, Keelung and Taichung, it said.

Of the 54 domestic cases reported outside Taipei and New Taipei City, 53 cases had known sources of infection, while one had an unclear connection with other cases, it added.

The 11 men and eight women who died were aged 40 to 90, the center said, adding that they had experienced an onset of symptoms between May 8 and Saturday last week, were confirmed to have COVID-19 between May 15 and Monday, and died between Tuesday last week and Tuesday.

Only three of them did not have a chronic health condition, CECC data showed.

Since COVID-19 first appeared in Taiwan, 22.7 percent of the deaths resulting from the virus have been people aged 75 or older, Deputy Minister of the Interior Chen Tsung-yen （陳宗彥）, who is deputy head of the center, told a daily briefing in Taipei.

Asked whether the nationwide level 3 alert would be extended beyond June 28, Chen said that the center would continue to observe the virus situation and take measures as needed.

From April 20 to Tuesday, 562 students were confirmed to have COVID-19, with another 12 cases confirmed on Wednesday, Ministry of Education data showed.

A second batch of the Moderna COVID-19 vaccine — 240,000 doses — is expected to arrive in Taiwan today, after the first batch of 150,000 doses arrived on May 28, the Chinese-language Liberty Times （sister paper of the Taipei Times） reported.

The batches are part of 5.05 million Moderna doses that Taiwan has ordered.

During a regular news briefing on Wednesday, Minister of Health and Welfare Chen Shih-chung （陳時中）, when asked whether other Moderna shipments would arrive soon, did not give a date, but said: “Of course, preparations have been made.”