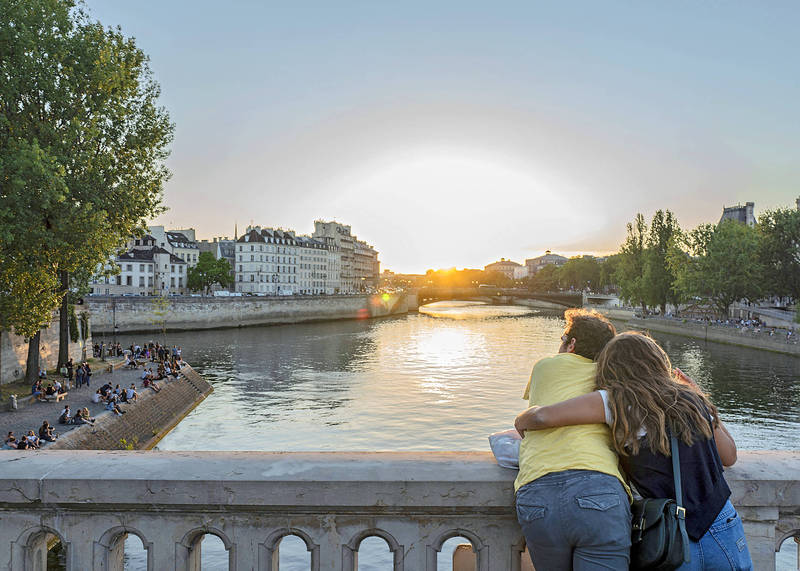 A couple watch the sunset on the Seine River bank in Paris on Monday. Photo: AP

The EU is set to lift travel restrictions for US and Taiwanese residents as soon as this week, in the latest step toward a return to normal, despite concerns over the spread of potentially dangerous COVID-19 variants.

Portugal, which holds the rotating presidency of the EU, proposed adding Taiwan, the US, Albania, Hong Kong, Lebanon, Macau, the Republic of Northern Macedonia, Saudi Arabia and Serbia to a so-called “white list” of countries from which non-essential travel to the bloc is allowed, a diplomat familiar with the matter said.

Assuming no objections, EU government envoys in Brussels would today approve the expanded white list, the diplomat said, asking not to be named, in line with policy.

The move would provide a boost for major EU airlines, such as Air France-KLM and Deutsche Lufthansa, which along with their US counterparts rely on the profitable trans-Atlantic corridors. Long-distance travel has been hit hard by restrictions brought on by the pandemic.

While some EU member states already allow vaccinated Americans to visit, inclusion in the white list means that restrictions would be lifted across the bloc. It also means that member states are free to allow quarantine-free travel from the US independently of vaccination status.

Despite the progress, trans-Atlantic travel would not be fully open until the US reciprocates and lifts a ban on most EU residents from entering the country.

The expansion of the EU’s white list of external countries, which already includes Japan, comes as internal travel within the bloc is being restored for those who are vaccinated or can prove that they have recently recovered from the virus.

As of July 1, holders of so-called digital COVID-19 certificates would be able to move freely anywhere in the EU’s 27 member states 14 days after the last shot.

The continued easing of pandemic-induced restrictions in the EU marks a stark contrast with Britain, where Prime Minister Boris Johnson decided to delay a full reopening for England due to a surge in infections with the delta variant of the coronavirus. The spike in infections, even as the UK has inoculated a larger share of its population than the EU, has alarmed some officials in Brussels.

European Commissioner for Health and Food Safety Stella Kyriakides was yesterday to tell the bloc’s health ministers at a meeting that they need to fully inoculate as many people as possible as quickly as possible, in the face of mounting evidence that the protective shield of vaccines is weaker against the delta variant, especially for those who have not received both doses.

Kyriakides was to urge ministers to take the threat of more contagious variants seriously, an official familiar with the matter said.