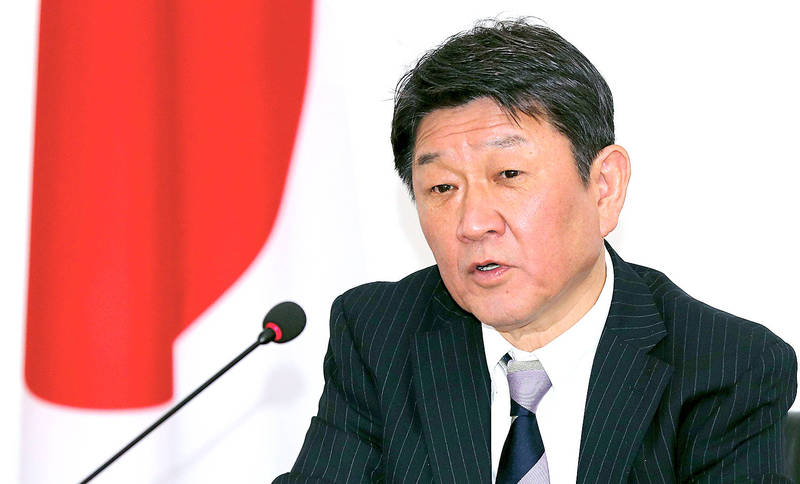 Japanese Foreign Minister Toshimitsu Motegi and his Bosnia and Herzegovina counterpart, Bisera Turkovic, not pictured, attend a joint press conference after a meeting in Sarajevo on May 1. Photo: EPA-EFE

Japan on June 4 donated 1.24 million doses of the AstraZeneca COVID-19 vaccine to Taiwan as the nation is grappling with a shortage of jabs.

Japanese Minister of Foreign Affairs Toshimitsu Motegi yesterday announced that Tokyo is sending 1 million doses to Vietnam today, and is considering sending another batch to Taiwan through the COVAX vaccine sharing initiative, as well as shipping vaccines to other Southeast Asian nations.

The government would maintain close communications with Tokyo and hopes that the vaccines would arrive soon, ministry spokeswoman Joanne Ou （歐江安） said.

In other developments, the ministry reiterated its support for Medigen Vaccine Biologics Corp （高端疫苗） to conduct phase 3 clinical trials for its COVID-19 vaccine candidate in Paraguay, after the developer announced its phase 2 trial results in Taiwan last week.

The company and the National University of Asuncion Faculty of Medical Sciences on April 22 met virtually to discuss clinical trials for COVID-19 vaccine development.

The ministry at the time said it welcomed the cooperation.

The two parties on May 12 signed a memorandum of understanding, with the faculty saying it “is interested in organizing and executing MVC’s [Medigen] COVID-19 vaccine clinical trials in Paraguay,” Chinese-language Mirror Media reported yesterday, publishing part of the document.

The ministry is glad to see medical cooperation between Medigen and the university, Ou said in a statement, adding that the ministry would continue to offer assistance.

Once the nation’s locally developed vaccines obtain emergency use authorization and after meeting the domestic demand for jabs, the government would be happy to share them with diplomatic allies to help them combat the pandemic, she added.

Paraguay is one of the nation’s 15 diplomatic allies and the only one in South America.