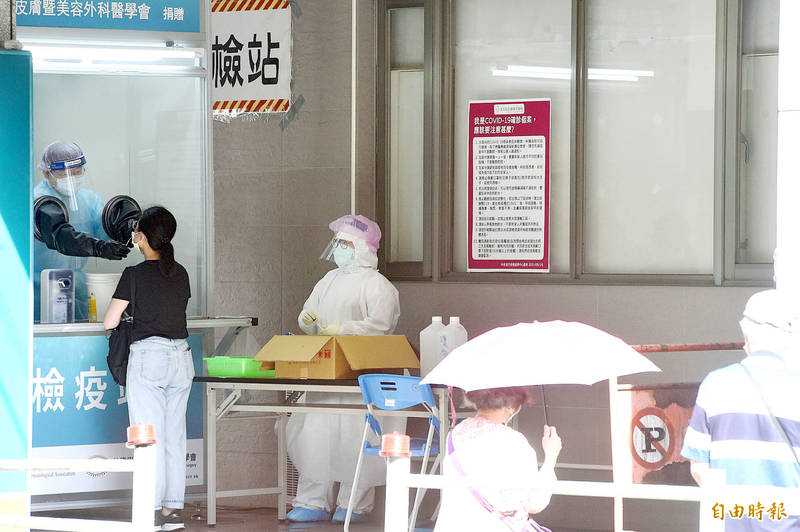 The center has reported fewer than 200 cases for three consecutive days, and the number of cases yesterday was the lowest since a nationwide level 3 COVID-19 alert was issued on May 19.

Minister of Health and Welfare Chen Shih-chung （陳時中）, who heads the center, said the local cases are 62 males and 70 females, from younger than five to older than 80, who experienced an onset of symptoms between June 1 and Monday.

New Taipei City had the largest number of cases at 65, followed by Taipei with 26; Miaoli County with 18; Taoyuan with 12; Keelung with three; Taichung, Tainan and Hualien County with two each; and Changhua and Chiayi counties with one each, he said.

Of the 41 cases reported outside of Taipei and New Taipei City, the infection sources of 33 cases have been identified, while six remain unclear and two are under investigation, Chen said.

The eight deaths are three men and five women, who were in their 50s to 90s and had underlying health conditions, CECC data showed.

The CECC’s Miaoli command center planned to conduct tests yesterday and today among about 1,400 foreign workers at six factories in Jhunan Township （竹南）, who have a higher risk of infection, Chen said.

However, the public need not worry as the workers have already been isolated for seven to 10 days, so the risk of the virus spreading into local communities is low, he said.

Of the 11,722 confirmed cases reported from May 11 to Sunday, more than half — 6,188 people, or 52.8 percent — have been released from isolation after recovering, Chen said, adding that this would ease the burden on healthcare and isolation facilities.

“The decline in daily case counts and number of deaths is a good sign,” he said. “The COVID-19 situation is heading in a relatively good direction, but we must continue to stay alert and not let our guard down.”

Asked if the level 3 alert could be lowered to level 2 for some cities and counties if the number of confirmed cases continues to drop in the coming days, Chen said there could still be changes before June 28 so the center would keep a close eye on the situation.

June 28 was the deadline set for level 3 restrictions.

The center “will not exclude any possibilities” on lowering the alert level for certain areas or in gradual phases, but it will have to first discuss the issue with specialists, he added.

Chen also announced that the center would provide 50 polymerase chain reaction （PCR） instruments to community testing stations to speed up community testing capacity, allowing people who have tested positive using at-home testing kits or in rapid tests at their companies to follow up with a rapid PCR test at their nearest station for confirmation.

As of Sunday, 249 community testing stations had been set up across the nation, the CECC said.