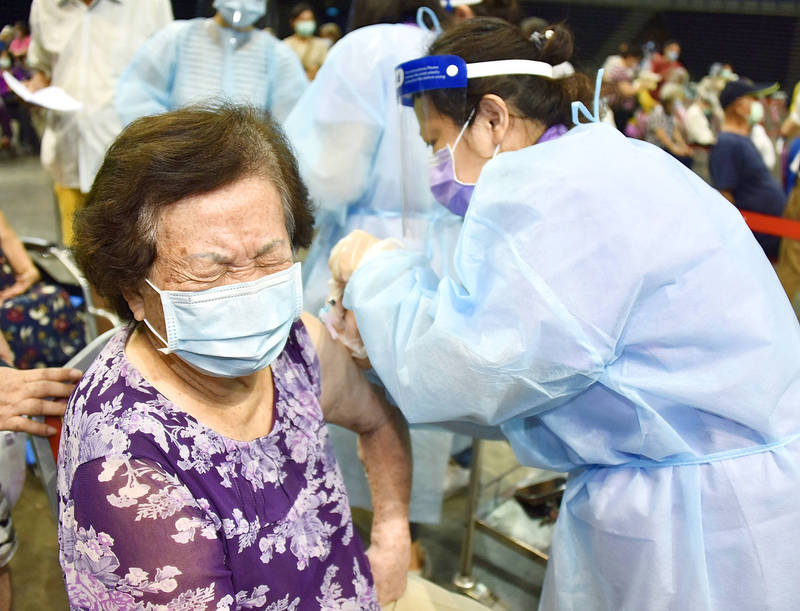 A medical worker administers the AstraZeneca COVID-19 vaccine at the K-Arena in Kaohsiung yesterday. Photo: CNA

DISTRIBUTION: High-risk areas — Taipei and New Taipei City — and the outlying islands are to receive extra doses of the vaccine, the center said

Given the high uptake of COVID-19 vaccines among people aged 75 or older, the Central Epidemic Command Center （CECC） yesterday announced that it would distribute another 394,800 doses of the AstraZeneca vaccine tomorrow, which would boost the coverage rate for this age group to 53 percent.

About 688,000 doses of the AstraZeneca vaccine were sent to local governments on Friday to administer to the top six priority groups, including people aged 75 and older.

Local governments yesterday started the mass vaccination program, and have adopted different strategies to facilitate the process, said Minister of Health and Welfare Chen Shih-chung （陳時中）, who heads the center.

Some cities and counties adopted a “Umi-machi style” of vaccine administration, with elderly vaccine recipients going to a designated venue and remaining seated while a team of medical professional move around the room to administer the shots one by one.

That is why the CECC has decided to distribute another batch of the AstraZeneca vaccine earlier so local governments can make the necessary arrangements as soon as possible, he added.

“The previous batch of vaccines is expected to cover 27 percent of those aged 75 or older. The next batch would raise the coverage rate to 53 percent,” Chen said.

Most of the vaccines are to be delivered tomorrow, except for those designated for Lienchiang County, which are to be sent out today, CECC data showed.

Asked if Taiwan would follow the UK’s policy change of bringing the second dose of the AstraZeneca vaccine forward to eight weeks from the first, rather than 12 weeks, Centers for Disease Control （CDC） Deputy Director-General Chuang Jen-hsiang （莊人祥）, who is the CECC spokesman, said it would be discussed with specialists.

Data released by the UK health authority suggest that people who receive both doses of the vaccine have stronger protection against the Alpha and Delta variants of COVID-19, he said.

With the daily number of cases in the UK increasing, the government likely wants more people to receive a second dose sooner, he said.

There are only three imported cases of the Delta variant in Taiwan, with the Alpha variant being the dominant strain among local cases, Chuang said.

The CECC will have to consider the domestic COVID-19 situation and the vaccination rate, and discuss the issue with the Advisory Committee on Immunization Practices, he said.