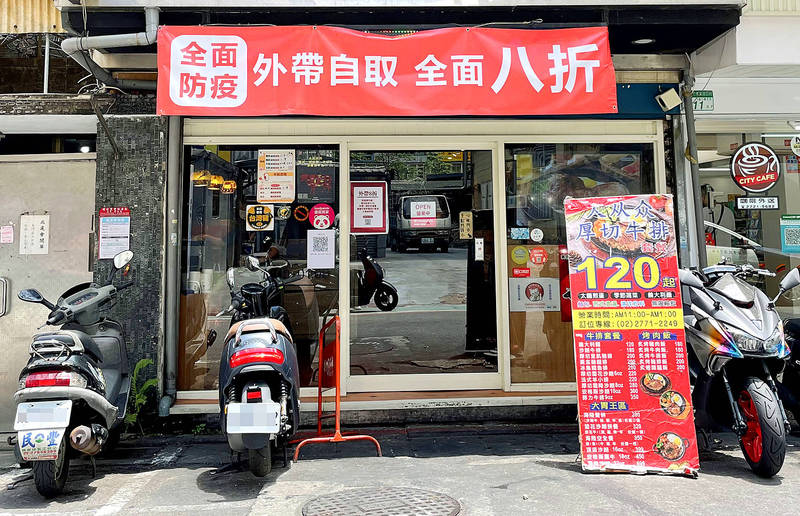 A sign promoting a 20 percent discount offer for takeout orders hangs above a restaurant in Taipei yesterday. Photo: CNA

TAKEOUT ONLY: Restaurant operators that rely heavily on the local market experienced steep drops in revenue, while companies with operations abroad fared better

Revenue at restaurant chains last month shrank drastically as people stayed at home to avoid virus infection after the government on May 19 issued a nationwide level 3 COVID-19 alert.

The dining sector in the first half of last month enjoyed high sales thanks to Mother’s Day celebrations, but suffered a sudden business freeze after the number of domestic infections escalated in the middle of the month.

The restaurant chain said it has temporarily halted operations at some outlets and has been offering only takeout services at most of its properties to maintain some cash flow and keep workers on the payroll.

Restaurants had since May last year been allowed to offer dine-in services as long as they maintained safe hygiene practices, including installing plastic screens between tables, to reduce infection risk.

Tai Tong operates 129 stores in Taiwan and 11 in China, and overseas operations provided some buffer amid the harsh operating environment in Taiwan, it said.

Wowprime said its business in China surged 42.3 percent year-on-year to a high of NT$620 million, as the vast market is emerging from the negative effects of the pandemic.

Sales at companies that rely heavily on the domestic market are likely to deteriorate this month, as the government has further tightened movement restrictions.