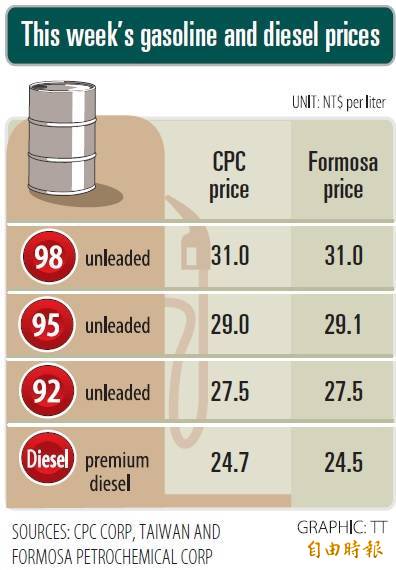 CPC Corp, Taiwan （CPC, 台灣中油） and Formosa Petrochemical Corp （台塑石化） yesterday announced that they would increase gasoline and diesel prices by NT$0.3 per liter this week, after raising them by NT$0.2 per liter last week.

CPC said the price hikes reflect higher global crude oil prices, which rose last week after US Secretary of State Antony Blinken on Tuesday said that he expects Washington’s sanctions on Tehran to remain in place, even if the US and Iran were to return to a nuclear deal, decreasing the possibility of Iran boosting its crude exports.

Oil prices also moved higher as summer is the high season for demand in the northern hemisphere, the state-run refiner said in a statement.

The number of initial claims for unemployment benefits in the US dropped for the sixth consecutive week last week, which supported oil prices, Formosa said in a separate statement.

Gasoline prices at CPC stations would rise to NT$27.5, NT$29.0 and NT$31.0 per liter for 92, 95 and 98-octane unleaded gasoline respectively, while the price of premium diesel would increase to NT$24.7 per liter, the company said.

Privately owned Formosa said that prices at its stations would rise to NT$27.5, NT$29.1 and NT$31.0 per liter for 92, 95 and 98-octane unleaded gasoline respectively, while the price of premium diesel would rise to NT$24.5 per liter.