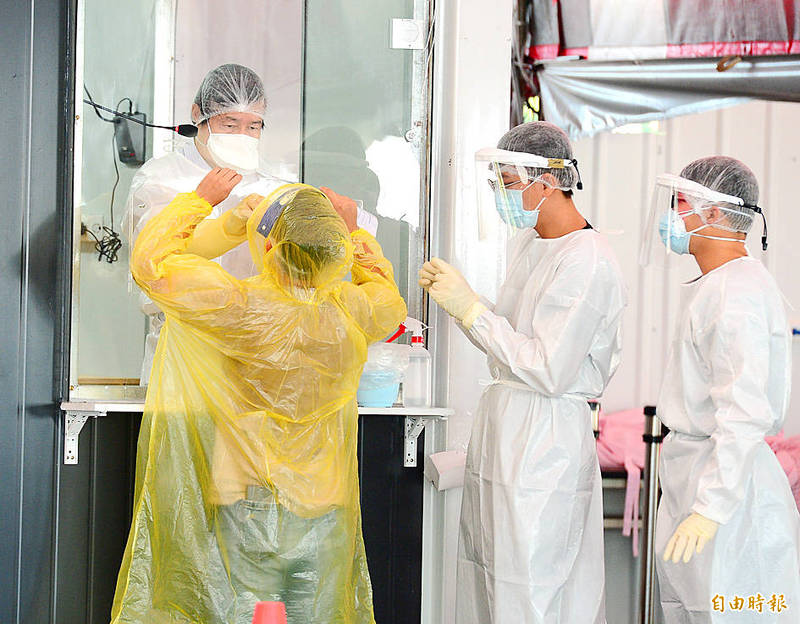 The local cases are 116 males and 134 females, aged from younger than five to older than 100, who began experiencing symptoms between May 28 and Friday, said Minister of Health and Welfare Chen Shih-chung （陳時中）, who heads the center.

Most new cases were reported in northern Taiwan, with 133 in New Taipei City, 65 in Taipei, 16 in Keelung and 13 in Taoyuan, Chen said.

Miaoli recorded nine new cases; Hualien had three; Hsinchu, Taichung, and Yilan and Changhua counties had two each; and Yunlin County and Kaohsiung had one case each, he added.

Among the 26 deaths reported yesterday, 17 were men and nine women, who were aged from their 40s to older than 100, Chen said.

Twenty-four of them had underlying health conditions, one had no comorbidities and one case is being investigated, CECC data showed.

Some of the new cases contracted the disease while being in contact with an infected person for just a short time, Chen said, adding that multiple infections within the same household were also common.

The daily case count has remained between 200 and 300 for several days, indicating that the pandemic situation has neither worsened rapidly nor improved significantly, Chen said.

People should remain vigilant, Chen said, adding that one of the center’s main goals is to detect infections as quickly as possible by expanding rapid COVID-19 testing.

While rapid testing at healthcare facilities and companies have been approved, a few local distributors have applied for importing at-home test kits.

Deputy Minister of the Interior Chen Tsung-yen （陳宗彥）, who is deputy head of the CECC, said that the center apologizes for causing inconvenience to commuters and delivery drivers affected by ramp metering controls implemented to discourage traveling during the Dragon Boat Festival extended weekend.

The center is thankful that many people who had plans to travel over the weekend instead stayed at home, Chen Tsung-yen said.

The traffic volume on Taiwan’s freeways at 8am yesterday was 67.7 percent of the volume at the same time last year, he said.

However, markets in Taipei and New Taipei City were still crowded with people yesterday morning, Chen Tsung-yen said, urging people to plan their shopping trips by writing shopping lists and going at a time when they expect less crowding.

Meanwhile, Chen Shih-chung said that the center has granted conditional approval to EirGenix Inc （台康生技）, commissioned by the Yonglin Charity and Education Foundation and Hon Hai Precision Industry Co founder Terry Gou （郭台銘）, for the importation of the BioNTech COVID-19 vaccine directly from the German firm.

If EirGenix provides an official certificate from the manufacturer, the Food and Drug Administration would issue an emergency use authorization for the vaccine, he said.