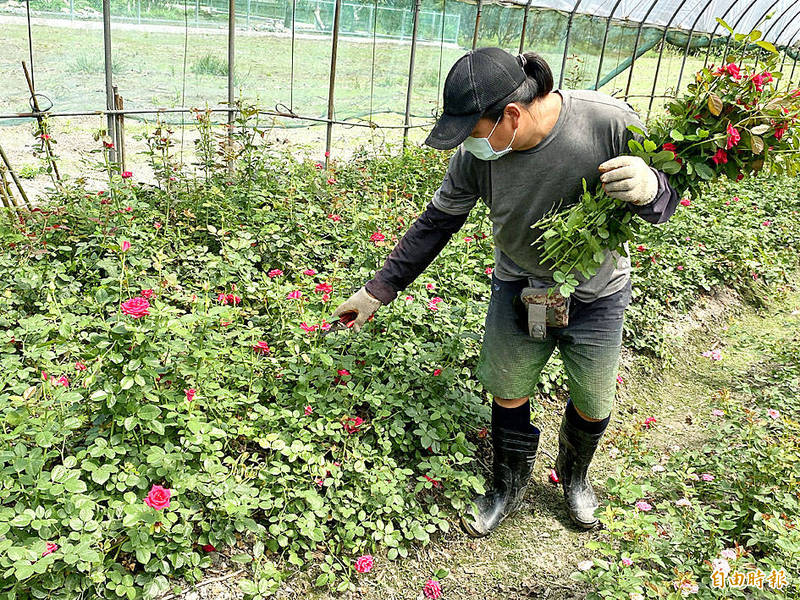 Nantou County, one of the nation’s biggest producers of flowers, has called on the government to provide subsidies, as prices have plummeted in the absence of graduation ceremonies and banquets, amid a water shortage.

Puli Township （埔里） has 400 hectares dedicated to cultivating flowers, which is estimated to bring in NT$2 billion （US$72.38 million） in profit per year.

While late seasonal plum rains would have reduced losses for farmers, a COVID-19 outbreak that started last month has led to the cancelation of graduation ceremonies and banquets, farmers said.

The ceremonies and banquets usually make up the majority of flower sales during this time of the year, they said.

One farmer, surnamed Juan （阮）, said that a bouquet of roses would be on the high end sold for NT$50 to NT$60 per bouquet at the wholesale market, and NT$30 to NT$40 on the low end.

Sales this year would not even cover overhead costs, Juan said, adding that farmers are also concerned that the pandemic would continue through the next flowering season.

Nai, who owns 6,789m2 of land, said that he had decided not to harvest roses this year, as he stands to lose more than NT$1 million.

The county government is today to survey the potential losses, and the township would ask that any subsidies include the flower industry, he said.

Sales of Texas bluebells have also fallen due to the pandemic.

The flower is often exported to Japan, especially during the winter, when the cold weather prevents it from being grown in Japan.

Chiayi County’s Singang Township （新港） contributed nearly 20 percent of total exports of the flower, which have in the past two years fallen due to the pandemic.

Farmers’ losses will keep mounting amid the level 3 COVID-19 alert, which is to be in effect until June 28, Singang Township Agricultural Association Supply and Demand Department director Cheng Ming-jen （陳銘仁） said yesterday.

A farmer surnamed Lin （林） said that exports for Texas bluebells stopped in April, but domestic sales had also been battered amid the outbreak.

Another farmer, surnamed Wu （吳）, turned to online platforms to sell the flowers and minimize losses, offering a bouquet for NT$200 while giving away a bouquet for free.

“The price is slightly lower than the total overheads, but it is much better than wholesale,” Wu said.