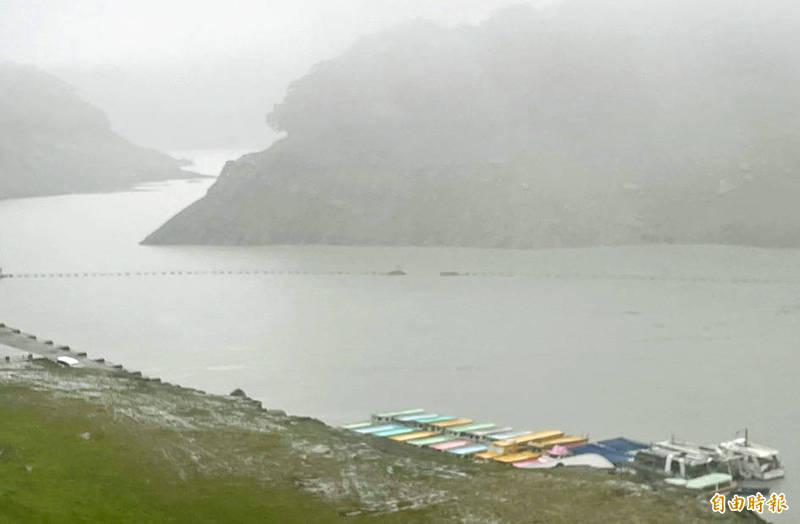 Recreational boats are moored on Shihmen Reservoir in Taoyuan yesterday. The rainfall over the past few days is expected to bring 23 million tonnes of water to the reservoir, which could fulfill another 18 days of water demand in Taoyuan, the Northern Region Water Resources Office said yesterday. Photo: Lee Jung-ping, Taipei Times

Hsinchu County was about to enter a “red alert” today if the precipitation over the past few days had not exceeded the 100mm mark, while Miaoli County, Taichung and northern Changhua County, still under the alert, would have faced even tighter restrictions.

For areas under a red alert, weekly water supplies to households and businesses are on for five days and off for two.

“It is true that our drought conditions have been greatly relieved by this rainfall,” Minister of Economic Affairs Wang Mei-hua （王美花） said. “But we need more just like it before we can call off the red alert in central Taiwan.”

Although the rotational water supply suspension of two days per week introduced in April would continue in Taichung and parts of Changhua, Miaoli and Hsinchu counties, a plan to extend the scheme by another eight hours per week from today has been shelved, she said.

After three days of rain, 89.2 million tonnes of water poured into the nation’s reservoirs as of yesterday morning, with 55 percent of it in central Taiwan, which has been the most severely affected by water shortages, the Water Resources Agency （WRA） said.

Most of the rainfall was in the catchment areas of reservoirs in central Taiwan and is expected to bring 25.5 million tonnes of water to Liyutan Reservoir （鯉魚潭水庫） in Miaoli and Techi Reservoir （德基水庫） in Taichung, the agency said.

By the time this plum rain runs its course it would bring more than 100 million tonnes of water to reservoirs nationwide, it said.

“We expect this plum rain to linger until Tuesday,” WRA Deputy Director-General Wang Yi-feng （王藝峰） said, citing forecasts by the Central Weather Bureau. “There might be another wave after Saturday, but it is too early to tell for sure.”

Taiwan is not out of the woods yet for this historic water shortage, as the forecast also indicates drier weather in the second half of this month. It would take another 110mm of rainfall before the red alert is removed for counties in central Taiwan.

However, the good news is that weather patterns appear to be returning to normal, Wang Yi-feng said.

The WRA said it would continue to drill more wells, use groundwater pumped from construction sites and use water desalination methods to boost the daily water supply by 764,000 tonnes this month.

As for the upcoming typhoon season, it is still too early to say what the “sky gods” would bring, Wang Yi-feng said.