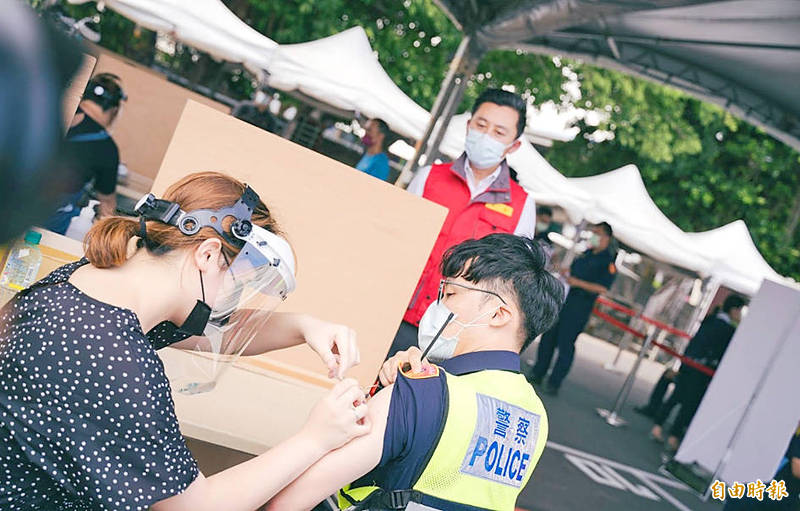 SIX APPLICATIONS: Minister of Health and Welfare Chen Shih-chung said the FDA received four applications and the CDC two, but none had the proper paperwork

The Central Epidemic Command Center （CECC） yesterday said that six applications had been received from groups hoping to purchase and import COVID-19 vaccines.

Late on Sunday evening, the center said that on Friday last week, it signed contracts with local vaccine makers Medigen Vaccine Biologics and United Biomedical for the advance purchase of 5 million doses from each.

At least 15 million people, or 65 percent of the population, need to be vaccinated to effectively protect against COVID-19 and each person needs two doses, so a total of 30 million doses are required, the center said.

On Friday last week, the center announced the documentation that local governments and businesses need to apply for Food and Drug Administration （FDA） approval to import COVID-19 vaccines.

Yesterday, Minister of Health and Welfare Chen Shih-chung （陳時中）, who heads the center, said that the FDA had received four applications, while the Centers for Disease Control （CDC） had received two, but that none of them had included the necessary documentation.

Ten agencies that media reports had said intended to import vaccines have not applied, he added.

“They would still need to apply for emergency use authorization （EUA） from the FDA, so the vaccine sources must meet the FDA’s requirements and the technical documents would need to be reviewed,” Chen said.

Deputy Minister of the Interior Chen Tsung-yen （陳宗彥）, who is deputy head of the center, said that representatives of the Fo Guang Shan Monastery in Kaohsiung, who last week said it planned to acquire up to 500,000 doses of the Johnson & Johnson vaccine and to donate them, visited the center yesterday morning to discuss the matter.

The center has assigned a contact person to the monastery, he added.

Chen Shih-chung said that it is better if the central government signs the procurement contracts with vaccine makers, because the government can ensure better legal protection, but the center is willing to discuss the matter with businesses or civic groups who insist on signing the contracts themselves.

The government is willing to step in and assist with legal matters because many of the vaccine makers are so far only willing to deal with governments, he said.

Regarding concern over domestic vaccines not yet in phase 3 clinical trials, Chen Shih-chung said that phase 3 trials can take a long time, but major COVID-19 vaccines — including BioNTech, AstraZeneca, Moderna and Johnson & Johnson — received EUA and were used in rollouts before finishing phase 3 trials.

The phase 2 trials for the vaccine candidates from Medigen and United Biomedical each enrolled more than 3,800 participants who took the two doses, which is considered an “expanded study” when compared with the studies for some major vaccines, he added.