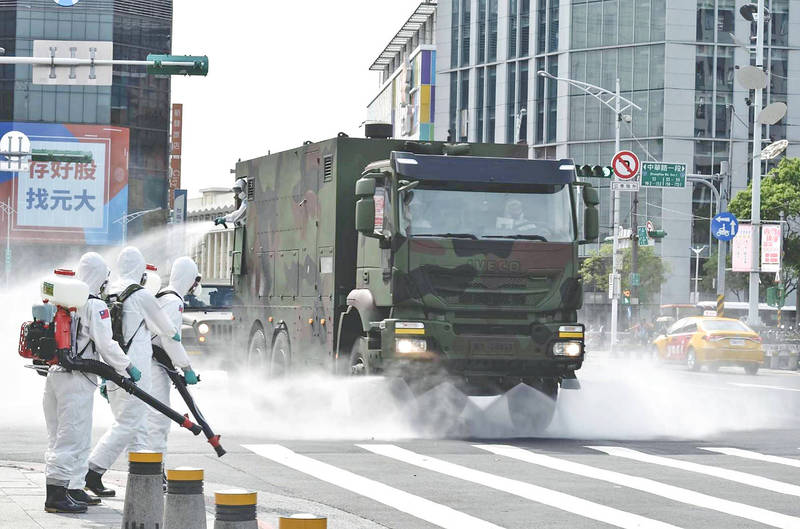 A truck sprays disinfectant along a street in Taipei’s Wanhua District yesterday as health officials attempt to suppress an outbreak of COVID-19 cases in the area. Photo: CNA / Military News Agency

RISING TRANSMISSION: The center yesterday reported 333 domestic cases, including 241 cases linked to a cluster of infections from Taipei’s Wanhua District

From 12am tomorrow to June 18, foreign nationals who do not hold a valid Alien Resident Certificate or resident visa will not be allowed to enter Taiwan, the Central Epidemic Command Center （CECC） announced yesterday, as it reported 333 local and two imported cases of COVID-19.

Transits through Taiwan will also be suspended during the month-long period, said Minister of Health and Welfare Chen Shih-chung （陳時中）, who heads the center.

“The policy is aimed at conserving the nation’s disease prevention capacity,” he said.

Although there had been few imported COVID-19 cases in the past few days, inbound travelers would still take up some of the nation’s testing and quarantine capacity, he said.

Yesterday’s two imported cases were travelers from the Philippines and Haiti.

Foreign nationals who must travel to Taiwan because of emergency humanitarian needs and those who have received special approval from the government are exempt from the entry ban, he said.

The ban is to be implemented for a month, but might be modified based on the latest COVID-19 developments, he added.

The local cases comprise 189 female and 144 male patients, aged five to more than 90, with the onset of symptoms or their testing dates occurring between May 5 and Sunday, Chen said.

By region, 158 of the cases live in Taipei — including 89 cases in Wanhua District （萬華） — and 148 in New Taipei City — including 41 cases in Banciao District （板橋）. The COVID-19 alert in the two municipalities was on Saturday raised to level 3.

Ten cases live in Taoyuan, six in Keelung, five in Changhua City, two each in Taichung and Yilan City, and one each in Hsinchu and Miaoli counties.

The center is still investigating the remaining 78 cases to see whether they are related to the reported clusters.

Asked about reports that some healthcare professionals had tested positive for COVID-19, Centers for Disease Control （CDC） Deputy Director-General Philip Lo （羅一鈞）, who is the deputy chief of the CECC’s medical response division, said that patients in six hospitals in Taipei and New Taipei City had tested positive for the virus.

Healthcare-associated infections have only occurred at Far Eastern Memorial Hospital （亞東醫院） in Banciao, with eight patients and one caregiver testing positive, while initial tests of healthcare professionals had been negative, he said.

The index case is a hospitalized patient, who had visited teahouses in Wanhua before being hospitalized, and the remaining cases all had connections with the case, such as staying in nearby rooms, Lo said, adding that the healthcare professionals were given a second test yesterday.

As one of the cases reported on Sunday reportedly experienced symptoms on April 6 — earlier than the cluster of infections linked to China Airlines Ltd （中華航空） and the Novotel Taipei Taoyuan International Airport hotel — speculation has been rising that there could be multiple hidden transmission chains within local communities.

The person tested positive at a COVID-19 testing station in Wanhua after receiving a mobile message from the CECC on Thursday last week, which informed people who had visited the area between April 15 and Wednesday last week to monitor their health, he said.

Based on what the person described, as well as polymerase chain reaction and antibody test results, the onset of symptoms occurred on Friday last week, rather than April 6, Chuang said.

The viral genome sequencing of several previous cases showed that many of the cluster infections contracted the same strain of the UK variant, and it would be a reasonable assumption that they originated from the same transmission chain, CECC specialist advisory panel convener Chang Shan-chwen （張上淳） said.

Just because the confirmed cases were detected in different locations does not necessarily mean there are multiple transmission chains, he said.

Although links to all cases have not yet been fully established, many of the infected were found to have a connection with one another, so the Taiwan area can be viewed as a large cluster of infections, he said.

Of the 1,682 confirmed cases in Taiwan as of Sunday, 568 infected people remain in hospital, he said.

These include 41 who have serious pneumonia or difficulty breathing, 15 of whom are in intensive care units and 13 who are on ventilators, he added.

Separately, Taipei Deputy Mayor Vivian Huang （黃珊珊） announced that starting from 4pm yesterday, operation of four types of recreational facilities in Taipei would be suspended until Friday next week.

The facilities are unattended claw machine arcades, prawn or fish fishing pools, virtual-reality of augmented-reality arcades, and restaurants that have karaoke bars, she said.