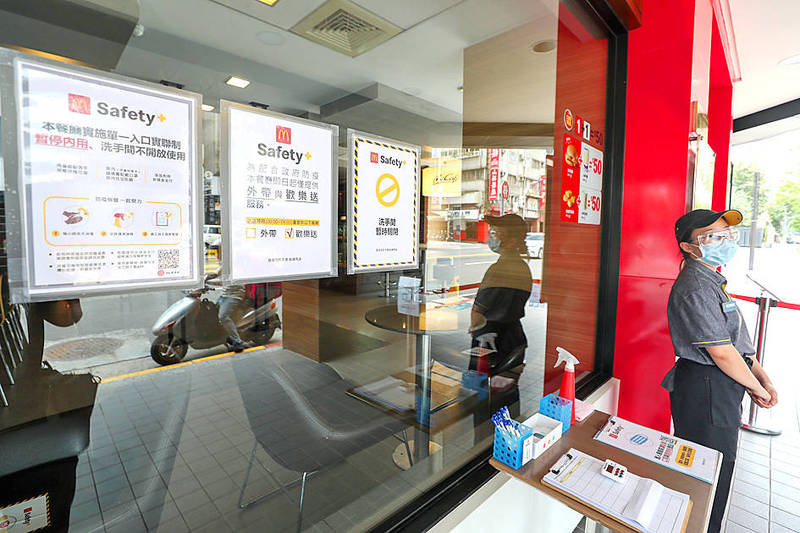 An employee at a McDonald’s restaurant in Taipei yesterday stands next to signs saying the store had suspended dine-in services until Friday next week. Photo: CNA

PANDEMIC MEASURES: Hotels in Taipei shut down their restaurants and banquet halls, while travel agencies are allowing customers to cancel tours for no extra charge

Local travel agencies have canceled tours and restaurants have suspended operations or begun offering takeout services amid a freeze in business as people stay at home to avoid COVID-19 infection.

The hospitality and tourism sectors are bearing the brunt of a spike in local infections after authorities raised the COVID-19 alert to level 3 for Taipei and New Taipei City over the weekend and advised against gatherings or going out.

Travel agencies, which have not yet emerged from the negative effects of the pandemic due to border controls, are now facing financial stress as domestic tourism has also come to a halt.

Lion Travel said safety is of top concern and it would cooperate with pandemic control measures.

Similarly, South East Travel said it would protect the interests of travelers and make adjustments in line with the government’s virus control measures.

Luxury hotel Le Meridien Taipei （台北寒舍艾美酒店） and the Ambassador Hotel （國賓飯店） have temporarily shut down their buffet restaurants and banquet facilities, while the Grand Hyatt Taipei （台北君悅大飯店） has closed its Japanese, Italian and Cantonese restaurants until June 8 and restarted drive-through service for takeout orders.

In addition, 100 outlets under different brands in the two cities have stopped offering dine-in services and are only offering takeout services until Friday next week.

Properties outside Taipei and New Taipei City would reduce capacity, take diners’ temperatures and require identification to help with contact tracing if needed, it said.

McDonald’s Taiwan also halted dine-in services at all of its restaurants in major cities in northern Taiwan until Friday next week, saying it would offer take-out and delivery services during the period.

Similarly, Feast & Food Gourmet Group （饗賓餐旅集團） said all of the restaurants operating under its seven brands in Taipei, New Taipei City and Taoyuan would stop dine-in services, and only offer take-out and delivery services during the period.

The group said it offers a 10 percent discount for take-out and delivery with a minimum order of NT$1,000.