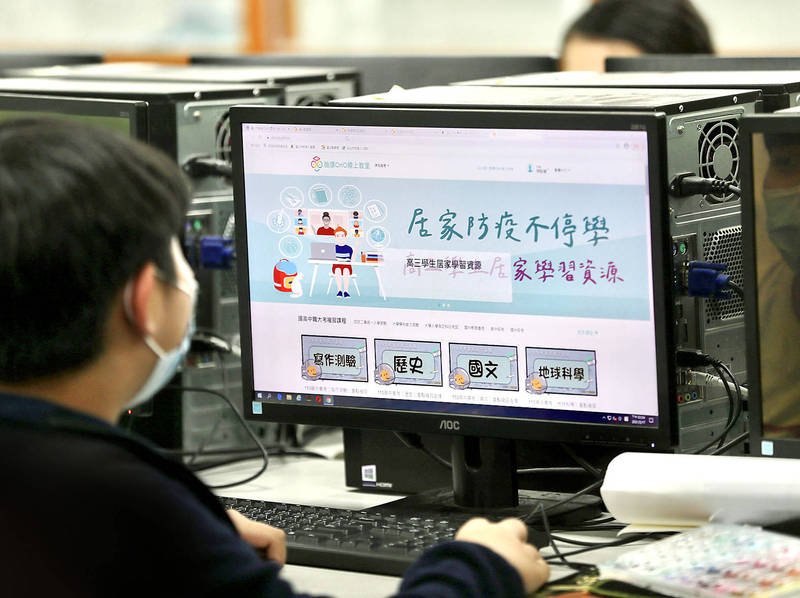 A student uses online teaching material after the Taipei and New Taipei City governments yesterday announced the suspension of school, starting today, due to a surge in COVID-19 cases. Photo: CNA

PREVENTION MEASURE: With more than 334,000 students affected, the policy aims to reduce the flow of people, so parents have been urged to keep their children at home

Taipei and New Taipei City yesterday announced the suspension of schools up to and including high-school level, starting today, in light of a surge in COVID-19 cases in the two municipalities.

The decision to suspend classes to reduce the risk of infection caused by people moving around was made after discussions with the New Taipei City Government, Taipei Mayor Ko Wen-je （柯文哲） told a news conference yesterday morning.

Locally transmitted cases have climbed fast in the past two days, and the high positivity rate of about 10 percent at temporary testing stations in Taipei’s Wanhua District （萬華）, where many cases were reported last week, suggests that the COVID-19 situation is serious and there is a certain level of community spread, he said.

Previously, the goal was to stop the virus at national borders and keep the number of local infections at zero, but the goal is now to prevent it from spreading further, Ko said.

One of the best public health measures to prevent viral transmission is to “stop people moving around,” so the city would start by suspending classes, he said.

Taipei Deputy Mayor Vivian Huang （黃珊珊） said school campuses where the Comprehensive Assessment Program for Junior High School Students exam was held over the past weekend have all been thoroughly disinfected, and schools near the city’s testing stations have also been sanitized.

“School is being suspended to reduce the flow of people, so we strongly urge all parents to make sure their children stay at home,” she said.

Taipei Deputy Mayor Tsai Ping-kun （蔡炳坤） said that classes for students in their third year of junior-high or high school would still be suspended until graduation, as announced on Sunday.

“Classes are suspended, but learning will not be suspended for students in the two weeks,” he said, adding that teachers and students are advised to use the city’s online learning platform — the Taipei CooC-Cloud database （台北酷課雲） — for learning.

The platform has more than 11,284 learning videos, 43,821 questions in its question database and links to 21 online databases, he said, adding that students can also join live streaming courses to learn things such as programming or foreign languages.

Taipei Department of Labor Commissioner Chen Hsin-yu （陳信瑜） said guardians of children who are 12 years or younger or who have disabilities can ask for unpaid “disease prevention childcare leave” to look after them while they are at home.

New Taipei City Mayor Hou You-yi （侯友宜） said a “suspend classes, but not suspend learning” online learning platform has been established so that students can continue self-managed learning and reading at home.

For students who do not have adequate online learning equipment at home, schools would lend them tablets, notebooks and mobile Internet cards, he said.

“The school breakfast and lunch subsidy for disadvantaged students will still be provided, and the city’s free-meal program — which allows children and adolescents 18 years old or younger to receive free meals at convenience stores within the city when an emergency situation occurs — will continue to be implemented,” Hou said.

Taipei Department of Education Deputy Commissioner Tseng Tsan-chin （曾燦金） said that there are 285 elementary schools and high schools, 291 preschools, 2,593 classes in cram schools and 199 after-class care centers in the city, and more than 334,000 students would be affected by the policy.