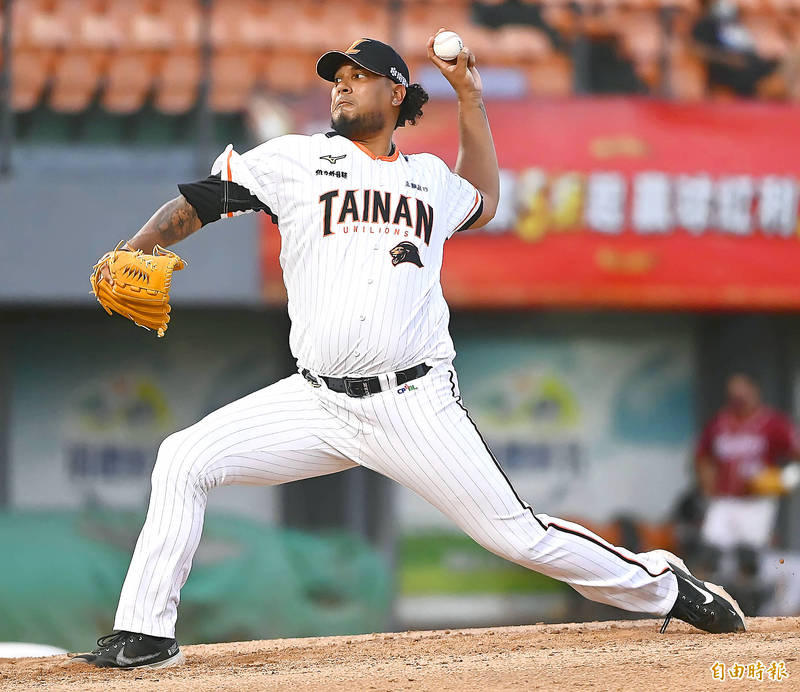 Taiwan’s sports leagues are adjusting to disease prevention measures after authorities on Saturday raised the COVID-19 alert for Taipei and New Taipei City to level 3 due to a surge in domestic cases.

Baseball games are being played in empty ballparks for the first time this season, while basketball’s P.League+ might not finish its championship series in its inaugural season after Game 5 was suspended yesterday.

The Rakuten Monkeys yesterday beat the Uni-President Lions in Tainan in a game held without fans and featuring the debut of former Boston Red Sox pitcher Felix Doubront.

Two games to be hosted by the Weichuan Dragons at Taipei’s Tianmu Stadium were suspended after the Central Epidemic Command Center raised the COVID-19 alert level.

Venezuelan pitcher Doubront, who won the 2013 World Series with the Red Sox, had a quality start for the Lions, yielding only four hits with five strikeouts and a walk over seven innings.

The lefty, who also had a stint in South Korea, found a new nemesis in the Monkeys’ Chen Chun-hsiu, who tagged Doubront with two runs.

In the first inning, Chen connected for an RBI single, leading to the first run of the game. He scored a homer off Doubront in the sixth. The Monkeys added three more runs in the ninth.

In P.League+’s Game 4, the Fubon Braves rallied past the Formosa Taishin Dreamers 115-90 at Changhua County Stadium on Saturday.

The Braves were leading 3-1 in the best-of-seven series before the virus alert level was raised, with disease prevention measures implemented nationwide.

The league decided to postpone Game 5, while looking for a suitable venue to finish the series.

P.League+ commissioner Chen Chien-chou yesterday said that if it cannot find a viable way to continue the series, it would award the Braves the championship trophy.

“It’s a hard decision, but neither team can find venues for training, and foreign players are concerned about Taiwan’s infection situation. We have to make a decision this week,” Chen Chien-chou said.

“It has been a great series, but we might not be able to present the trophy to a winning team. We hope that players and fans understand,” he said, adding that it had been “an imperfect season” for the new league.

Taiwan’s senior circuit SBL is also facing uncertainly, due to the suspension of the championship finals between the Yulon Dinos and Taiwan Beer, originally to be held on Saturday and yesterday.

The best-of-seven SBL final has been put off indefinitely, until the level 3 restrictions are lifted, the governing CTBA said, adding that the post-season for the women’s league was also suspended.

The SBL and P.League+ had last week said they would hold games behind closed doors without fans before the new restrictions.

The escalating outbreak struck at the worst time for basketball. The leagues depend on sold-out crowds at championship series, when tickets are sold at a premium, generating much-needed revenue.

Originally to take place at the 7,100-capacity New Taipei Sinjhuang Gymnsium, the SBL finals were moved to the smaller Hao Yu Sports Center, also in Sinjhuang District, before the games were put on hold.

All matches in the nation’s main soccer leagues have been postponed to after next month, the Chinese Taipei Football Association said last week.