《TAIPEI TIMES》 Hoarders hit stores, despite calls not to 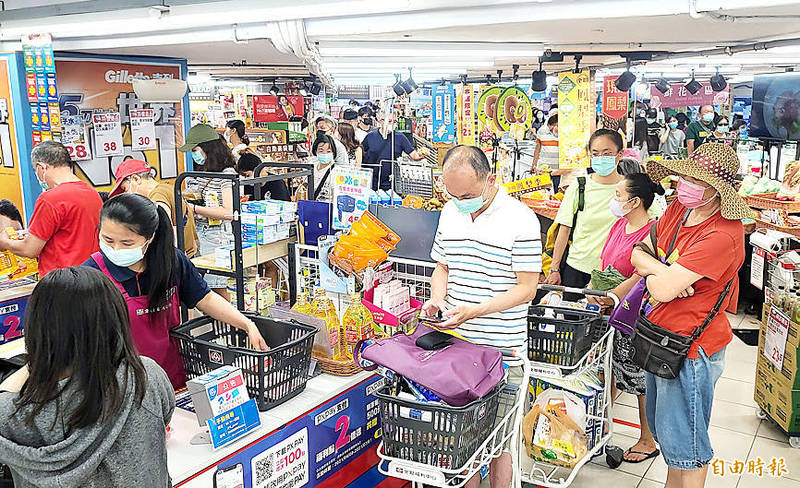 Shoppers yesterday line up at a cashier in a Taipei supermarket packed with people. Photo: Fang Pin-chao, Taipei Times

SUFFICIENT SUPPLY: Taiwan has an abundance of pandemic-related goods in storage, and protocols have been implemented to ensure that the supply chain is not broken

Hordes of customers descended on hypermarkets and supermarkets in Taipei and New Taipei City after the government yesterday raised the COVID-19 alert level for the two municipalities to level 3 until May 28.

Earlier in the day, the Central Epidemic Command Center reported 180 new domestically transmitted cases, most of them in Taipei and New Taipei City.

Despite the government urging the public to stop hoarding daily necessities, shelves were stripped bare while cashiers were working as fast as they could.

The Centers for Disease Control and Chunghwa Post have 800 million masks in storage, while daily production capacity is 40 million, Su said.

Su cited Taiwan Tobacco and Liquor as reporting that it has 570,000 bottles of medical-grade isopropyl alcohol in storage and its daily manufacturing capacity stands at 200,000 bottles.

There are 315,000 specialized masks in storage, along with 2.7 million whole-body protection suits, and 13 million isolation gowns, Su added.

The nation has an abundance of pandemic-related goods in storage and the public should rest easy, he added.

Separately, New Taipei City Mayor Hou You-yi （侯友宜） yesterday said that there are two to three times the normal amount of daily necessities and pandemic-related goods on store shelves, and warehouses are well-stocked.

A scarcity of goods on the shelves yesterday was due to bulk purchases being made by many people over a short period and store staff simply have not had time to restock the shelves, he said.

The Council of Agriculture （COA） yesterday said that it has initiated emergency protocols to ensure that the supply chain does not break down from the sudden increase in demand.

The COA would increase the amount of produce and goods allocated to direct sales and field-to-house delivery chains, he said, adding that it has asked online store owners to immediately take inventory of their stock.

In light of the surge in visitors yesterday, Pxmart, the nation’s biggest retail chain, said that it was temporarily halting services for its delivery platform.

A-Mart hypermarket said it has instituted nationwide provisions limiting purchases of certain goods, including medical-grade isopropyl alcohol, masks and tissue paper, to one unit per customer, while limiting water, instant noodles and canned goods to three units per customer.