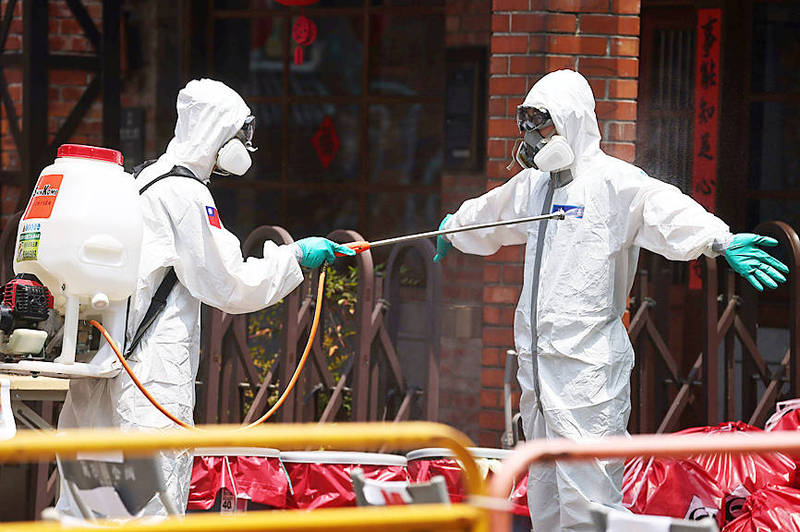 RAISED ALERT: If an average of 100 cases are reported for 14 consecutive days, a level 4 warning would be issued and travel restricted, Chen Shih-chung said

Minister of Health and Welfare Chen Shih-chung （陳時中）, who heads the center, said that the 180 local infections included 58 men and 112 women, aged from under five years old to older than 80, and the onset of symptoms occurred between April 23 and Friday.

The confirmed cases include 89 residents of Taipei, 75 residents of New Taipei City, six from Changhua County, four in Yilan County and Taoyuan, and one each in Taichung and Keelung, he said.

Among the cases in Taipei, 43 were in Wanhua District （萬華）, he added.

As cluster infections, involving dozens of cases, were confirmed in Wanhua, New Taipei City’s Lujhou District （蘆洲） and Yilan County in the past week, and most cases reported yesterday were in Taipei and New Taipei City, Chen said that the center would raise the COVID-19 alert to level 3 in the cities.

Due to the “unique characteristics” of businesses in Wanhua, many infected cases were unwilling to reveal their contacts and whereabouts, he said.

Seventeen cases in the airline and hotel cluster, 10 associated with social club members at Lujhou, four associated with tea houses in Wanhua and a case at a gambling house in Yilan County were all infected by the same strain of the UK variant, he said.

Chen said that enhanced disease prevention measures would be implemented nationwide along with tightened restrictions in Taipei and New Taipei City, effective immediately until May 28.