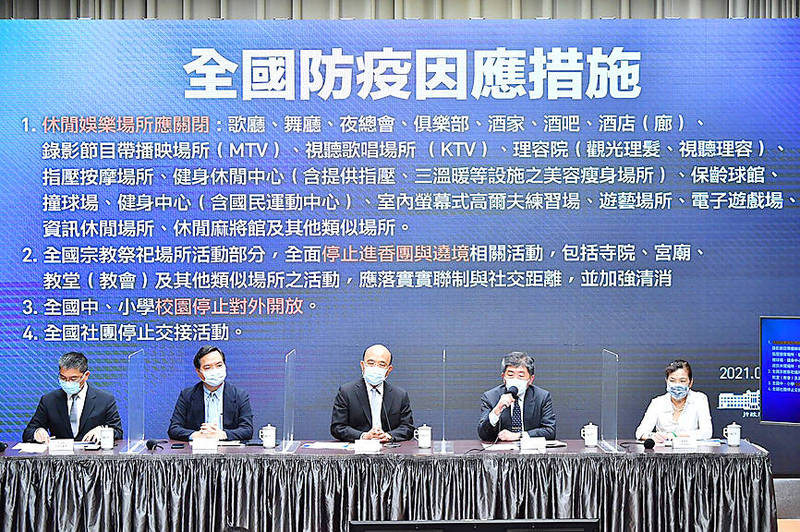 ENFORCING CAUTION: Certain entertainment facilities are to close nationwide to prevent people traveling there from high-risk areas in the north, the center said

The Central Epidemic Command Center （CECC） yesterday raised the COVID-19 alert for Taipei and New Taipei City to level 3 in light of surging cases in the two cities.

The enhanced disease prevention measures for level 3 are to be implemented until May 28, Minister of Health and Welfare Chen Shih-chung （陳時中）, who heads the center, told a morning news conference at the Executive Yuan in Taipei.

Other counties and cities remain at level 2 alert, the authorities said, adding that unnecessary travel between areas at level 2 and level 3 is to be avoided.

Chen said that the test positivity rates in hot spots in Taipei and New Taipei City has increased over the past few days, ranging from 3 to 10 percent, adding that there is a “rather high infection risk” in the two cities.

“The current approach of using contact tracing to contain the spread of the virus might have limited effect, so we need to take community disease prevention measures and raise the COVID-19 warning level to effectively control this outbreak,” Chen said.

Chen said that although the majority of the confirmed local infections are in Taipei and New Taipei City, recreational facilities would be closed across the nation to avoid people traveling to facilities in other cities and counties.

Entertainment facilities in Taipei and New Taipei City had been ordered to close from 4pm on Friday, he said.

Additional enhanced disease prevention measures for Taipei and New Taipei City include: a mask mandate at all times when leaving your home; no unnecessary travel, events or gatherings; and the suspension of social gatherings of more than five people indoors and more than 10 people outdoors, excluding families living in the same household.

The measures also include that people should monitor their health and contact a health department for testing immediately or seek medical attention if symptoms occur; businesses and government facilities should implement crowd control, a mask mandate and social distancing rules.

Companies should follow business continuity guidelines to manage employees’ personal and workplace hygiene, and launch responsive measures, such as staggered operation, remote working or flexible working hours; restaurants must register the contact information of visitors, implement a social-distancing regime by, for example, using panels to separate visitors, or only allow take-out customers.

Weddings or funerals are also required to register the contact information of participants, and implement social distancing and disinfection measures.

Public venues and means of public transportation would be cleaned and sanitized more often, Chen said.

Those who contravene restrictions on gatherings or religious events, and businesses that fail to suspend operations if they are ordered to do so would be fined NT$60,000 to NT$300,000, Chen said.

A passerby in Taipei yesterday looks at a notice at the entrance of a World Gym, which announced that all of its branches in Taiwan will be closed from yesterday to May 28. Photo: CNA

A “closed” notice is posted at the entrance to Taipei Public Library’s Yongchun Branch yesterday. Public libraries in Taipei and New Taipei City are closed from yesterday to curb the spread of COVID-19. Photo: CNA