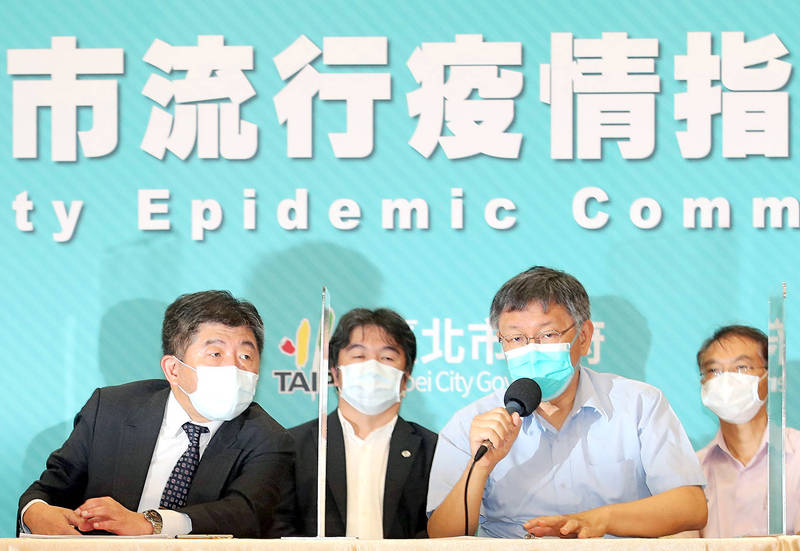 TRACING TROUBLE: An infected man who had said that all his children were abroad was found to have a daughter in Kaohsiung who tested positive, the center said

Of the 29 cases, 16 are linked to tea houses in Taipei’s Wanhua District （萬華）, Minister of Health and Welfare Chen Shih-chung （陳時中）, who heads the center, told a news briefing in Taipei.

The 16 are tea house workers or visitors, or their contacts, the CECC said.

Workers and visitors to the establishments have frequent interpersonal contact, but few protective measures against the COVID-19 pandemic are in place, Chen said, urging those who have been exposed or have symptoms to seek medical assistance.

People who suspect they have COVID-19 should visit designated testing and treatment facilities, instead of waiting or buying over-the-counter drugs for treatment, he said.

Pharmacists who encourage people to get tested would be rewarded if their action leads to the detection of a COVID-19 case, he said, without specifying a planned amount.

Cases No. 1,272 and No. 1,273 were first reported on Thursday night, when they were found at the Taipei City Hospital’s Heping branch, causing fears of a potential lockdown of the hospital similar to what happened there during the SARS outbreak in 2003.

Earlier yesterday, at a joint news conference with Taipei City Mayor Ko Wen-je （柯文哲）, Chen said that there were no plans to lock down the branch.

However, the branch has suspended services at its emergency room to disinfect the facility, Ko said, adding that its outpatient units are only open to people who have appointments.

Not all hospitals in Taipei are supervised by the city government, Ko said, urging the central government to open more hospitals to COVID-19 patients.

Of the 29 local cases reported yesterday, five are linked to a cluster infection linked to case No. 1,203, a Taiwanese man in his 60s who is a former president of a Lions Club chapter in New Taipei City’s Wugu District （五股）, Chen told the CECC event.

The cluster comprises 25 cases. Case No. 1,229 — another member of the chapter — was found to have lied about his contact history, Chen said.

The man had reported that all his children are abroad, but it was found that his daughter lives in Kaohsiung, Chen said.

After the daughter learned about her father’s infection, she got tested, and the test was positive, Chen said.

Moreover, one local case reported yesterday had contact with a case linked to a cluster at the Galaxy Baccarat （銀河百家樂） gambling house in Yilan County’s Luodong Township （羅東）, the CECC said.

As for the other seven local cases, their sources of infection are not known, it said.

The CECC yesterday reported five imported cases, two travelers from Indonesia, two from Paraguay and one from Albania.

Meanwhile, after local media reported that an employee at the Presidential Office was under investigation by the CECC, the office yesterday said in a statement that two relatives of the person on Thursday last week dined with case No. 1,203.

President Tsai Ing-wen （蔡英文） and Vice President William Lai （賴清德） did not have contact with the employee, the office said, adding that both leaders are healthy and that their conditions are being monitored by medical experts.

In other developments, the Ministry of Foreign Affairs said that a medical charter flight from India arrived in Taiwan yesterday, adding that it brought back a diplomat working in India for treatment for COVID-19.

The diplomat, who works at the Taipei Economic and Cultural Center in India, is one of two COVID-19 cases confirmed there on Monday, the ministry said, adding that the envoy is the third Taiwanese diplomat who was returned from New Delhi for COVID-19 treatment.