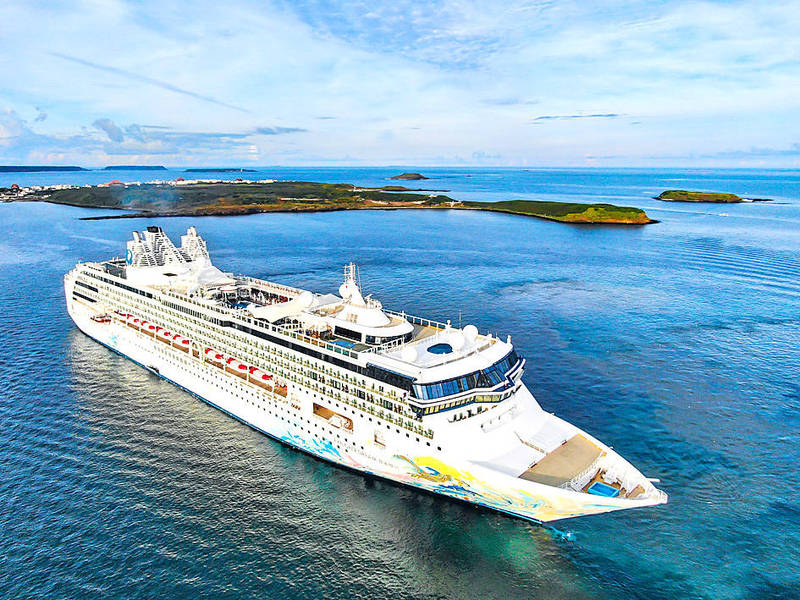 The Explorer Dream cruise ship is pictured in an undated photograph. Photo courtesy of KLOOK

PRECAUTION: The Xiuguluan River Rafting Triathlon has been canceled, while Explorer Dream island-hopping tours have been suspended until June 8

The Tourism Bureau has canceled or postponed several tourism events that were to be held by national scenic area administrations after the Central Epidemic Command Center raised the COVID-19 warning to level 2 following a surge in locally transmitted cases.

The Xiuguluan River Rafting Triathlon, which was to be held on June 6, has been canceled, the bureau said.

The Fulong International Sand Art Sculpture Festival in New Taipei City would be rescheduled to after June 8, while the opening concert of the Taiwan East Coast Land Art Festival would be postponed to July 22, it added.

The bureau said it would strictly regulate the entry of visitors into tourist attractions and amusement parks to prevent the spread of the disease.

Amusement parks need to stipulate different response plans for scenarios in which the number of visitors inside the venues reaches 50 percent, 55 percent and 60 percent of capacity.

Explorer Dream island-hopping cruise ship tours have been suspended until June 8 as a precaution, the Maritime and Port Bureau said.

In related news, as the Special Act for Prevention, Relief and Revitalization Measures for Severe Pneumonia with Novel Pathogens （嚴重特殊傳染性肺炎防治及紓困振興特別條例規定） would be extended until the end of this year, the Ministry of Transportation and Communications said it would request more relief funds for the travel industry, as the sector is still being affected by the COVID-19 pandemic.

While the relief funds, which are to expire at the end of next month, are mainly used to cover part of the salaries of travel industry workers, Minister of Transportation and Communications Wang Kwo-tsai （王國材） said the ministry is planning a different approach to using the funds, should they arrive in the third and fourth quarters.

“Travel industry workers receive the relief funds as salaries, because they have lost their jobs. However, they should start getting fit for the tourism market, as more and more people are getting vaccinated and international tourism would gradually reopen,” he said.

Meanwhile, China Airlines has said that given low passenger loads for the Taiwan-Palau “travel bubble,” it would cancel two weekly round-trip flights between the two destinations on Saturday and Wednesday next week.

Travel Agent Association of Taiwan chairman Hsiao Po-jen （蕭博仁） said the escalation of COVID-19 cases has added to the woes of the program, for which demand had already been low.

The ministry said the “travel bubble” would remain in place, although Hsiao said the arrangement’s prospects are rather dim now that there are more domestic infections.