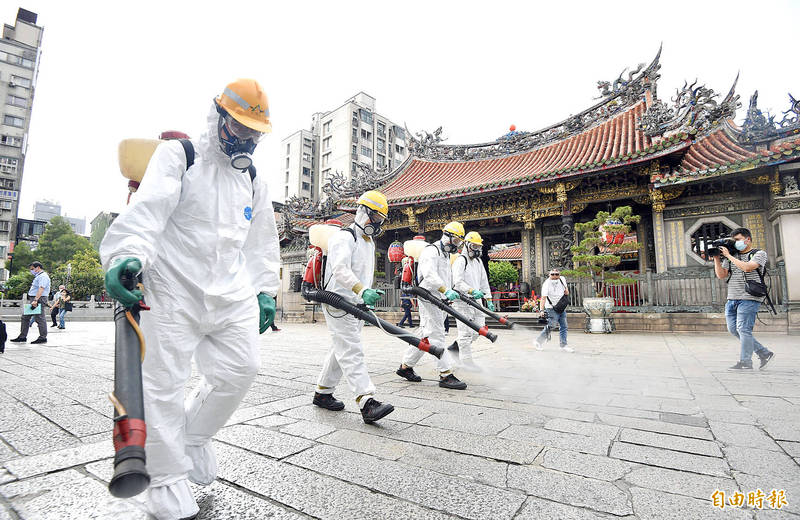 SIXTEEN LOCAL: Three COVID-19 infections are linked to a cluster at a gambling house in Yilan County, 10 to a case in New Taipei City and three had unclear sources

Minister of Health and Welfare Chen Shih-chung （陳時中）, who heads the center, said that 21 cases were confirmed in Taiwan yesterday: 16 local cases, four imported cases and one case undetermined.

The locally transmitted cases are three linked to a cluster of infections at a gambling house in Yilan County, 10 associated with a previous case in New Taipei City and three with unclear sources of infection.

One more employee and two family members of two previously infected employees have not shown any symptoms, but tested positive for COVID-19 yesterday, bringing the cluster of infections to eight people, Chen said.

One of them is an elementary-school student, so his classes have been suspended and his classmates ordered to isolate at home, he said.

On Tuesday, the CECC reported that case No. 1,203, a former Lions Club president in New Taipei City, attended banquets while he was contagious.

Ten new confirmed cases — five women and five men aged 50 to 80 — are linked to the man, including his wife and nine close contacts of the club, so the cluster has expanded to 11 people, Chen said.

Among the cases with unknown infection sources, case No. 1,217 is a woman in her 50s who on May 2 reported a fever, coughing and shortness of breath, and sought treatment at a clinic five times from Tuesday last week to Monday, Chen said.

The woman went to a hospital on Tuesday with difficulty breathing, abdominal pain and muscle soreness, he said.

She was diagnosed with pneumonia and tested for COVID-19, he said, adding that the result came back positive.

Fourteen close contacts have been ordered to isolate at home, he said.

Case No. 1,220 — a woman in her 60s who works at Hongda Tea House （鴻達茶藝館） on Sanshui Street in Taipei’s Wanhua District （萬華） — on Thursday last week reported symptoms of fatigue, fever and a sore throat, and sought treatment at a clinic on Friday and Saturday last week, Chen said.

The woman sought treatment at a hospital on Tuesday as the symptoms were not relieved, and she was diagnosed with pneumonia and tested positive for COVID-19, with 30 close contacts placed in home isolation, he said.

Case No. 1,221 — a woman in her 50s who works at Fengxiang Tea House （楓香清茶館） on Siyuan Road Sec 2 in Wanhua on Monday reported an itchy throat, coughing and chills, and was tested at a hospital on Tuesday, he said.

The test came back positive and 12 close contacts have been placed in home isolation, he said.

Local health departments are conducting contact tracing on the confirmed cases to identify other close contacts and the locations they visited, Chen said.

A China Airlines （華航） flight attendant who worked with case No. 1,187 — a pilot — on a flight to Vietnam on Wednesday last week also tested positive, Chen said.

The CECC also reported four imported cases — three migrant workers from the Philippines and a Taiwanese who returned from India.