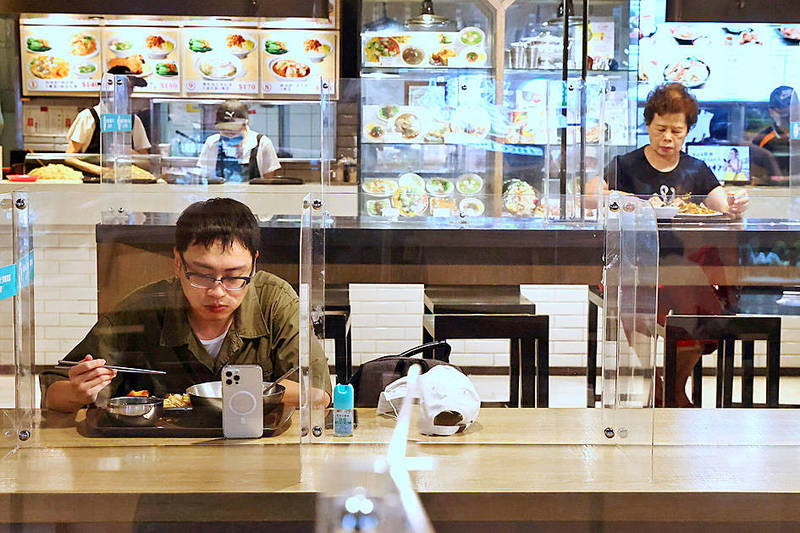 Following a cluster of cases among China Airlines （華航） pilots, workers at its quarantine facility, the Novotel Taipei Taoyuan International Airport hotel, and their family members since the middle of last month, the CECC on Tuesday reported six locally transmitted cases with unknown infection sources.

On the same day, it announced that Taiwan’s COVID-19 situation has entered the “local transmission” stage, and raised the domestic warning to level 2, ordering enhanced disease prevention measures to be implemented until June 8.

The CECC yesterday reported 16 new locally transmitted cases, including three with unknown infection sources, prompting Minister of Health and Welfare Chen Shih-chung （陳時中）, who heads the center, to say that “the COVID-19 situation has entered a severe stage.”

“Those who are unable to thoroughly practice the measures may be asked to suspend their business,” he said, adding that inspections at venues of high risk of infection will be increased, and businesses might be fined or even ordered to close recreational areas or public spaces for failing to comply with the rules.

Second, reporting of suspected COVID-19 cases is to be accelerated, he said, adding that there are currently 164 testing stations, but others would be reopened in the next week to allow people to get tested more easily.

“We hope that healthcare facilities can apply their expertise and refer any suspected case to COVID-19 testing,” he said.

The third guideline is that “expanded standards for identifying close contacts, placing them under home isolation and arranging testing will be implemented to build a firewall against further infections and to detect infections earlier,” he said.

The other main guidelines are increasing capacity at quarantine facilities, restoring isolation wards at designated COVID-19 hospitals in the next week and asking authorities to strictly review applications for short-term business travelers seeking shorter quarantine periods, he said.

A level 2 warning remains in place for the time being, Chen said.

A level 3 warning would prompt measures including a ban on gatherings of more than five people indoors and 10 people outdoors, as well as suspension of some business operations.

Centers for Disease Control Deputy Director-General Chuang Jen-hsiang （莊人祥）, who is the CECC’s spokesman, said that the standard for issuing a level 3 warning is “three clusters of local cases reported in a week, or more than 10 local cases with unknown infection sources reported on the same day.”

The level 3 restrictions on gatherings indoors does not apply to workplaces, Chen said.

Two clusters of local infections were detected this week in Yilan County and New Taipei City.

The center will ask police to enhance disease prevention inspections at such venues, he said, adding that no connection had been found between the two cases.

At McDonald’s stores nationwide, entry is restricted to a single door and customers inside are required to provide their name and a contact number to facilitate possible contact tracing by health authorities.

The information is collected via a QR code or by customers writing their name and telephone number before entering the store, the company said.

Carrefour has adopted similar measures, and food sampling has also been suspended at all of its hypermarkets, it said.

The nation’s four major convenience store chains — 7-Eleven, Family Mart, Hi-Life and OK Mart — have temporarily closed their public toilets and require people to wear a mask on their premises, while social distancing is mandated for customers eating on-site.

A McDonald’s employee, right, checks a customer’s temperature at a store in Taipei yesterday. Photo: CNA