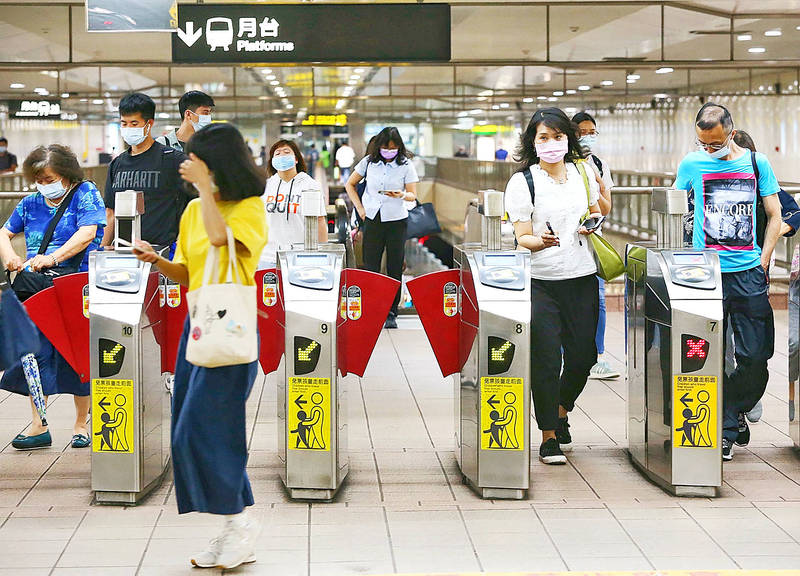 People pass through the gates of an MRT station in Taipei yesterday, as the Ministry of Transportation and Communications urged people to follow the Central Epidemic Command Center’s rules when using public transportation. Photo: CNA

TRAVEL: Eating and drinking onboard trains, highway buses, ships and planes are in general banned, while sales of standing-room tickets for trains have been suspended

Public commuters are to observe stricter disease prevention guidelines from now until June 8 after the Central Epidemic Command Center raised the alert level for COVID-19 following an increase in local cases, the Ministry of Transportation and Communications said yesterday.

With the CECC reporting six local COVID-19 cases with unknown sources of infection, Minister of Transportation and Communications Wang Kwo-tsai （王國材） said that airplane, ship, highway bus and train passengers are in general banned from eating and drinking onboard.

If they have to drink water, take medication or breastfeed their children, they can take off their mask and put it back on as soon as they finish, he told a news conference in Taipei.

However, tourism train, cruise ship and international flight passengers can temporarily take off their masks to eat if they are able to observe social-distancing guidelines or there are partitions separating them, he added.

People visiting post offices are banned from eating or drinking inside the premises, he said.

Starting on Saturday, Taiwan Railways Administration’s intercity train services and Taiwan High-Speed Rail Corp would stop selling standing-room tickets or tickets without reserved seats, Wang said, adding that all railway stations are prohibited from leasing them to the private sector to host activities until after June 8.

Large outdoor events in scenic areas and amusement parks are limited to 500 participants, per the CECC’s instructions, he said.

As for CECC’s “down to zero” plan to address a cluster infection at Novotel Taipei Taoyuan International Airport hotel, China Airlines and Accor — the French hospitality company that the airline recruited to manage the transit hotel — have reached an agreement that the hotel would have both Hall 1 and Hall 2 designated as quarantine facilities, Deputy Minister of Transportation and Communications Chi Wen-chung （祁文中） said.

While the hotel only has Hall 2 certified as a quarantine hotel by the Taoyuan City Government, it had also used Hall 1 — which should only have hosted host general tourists — to accommodate China Airlines pilots and flight attendants, which was against disease prevention regulations, a CECC investigation found.

The hotel is scheduled to reopen in the second half of next month, with the two halls switching to certified quarantine facilities, Chi said.

With 500 rooms, the reopened Novotel hotel would not have enough rooms to meet the demand of China Airlines, which needs 600 to 800 rooms to accommodate its flight and cabin crew, Chi said, adding that the airline would have other quarantine facilities to host pilots and flight attendants.

For foreign pilots who need to transit through Taiwan, the CECC would find other quarantine hotels to host them, he said.

“In the past, the Civil Aeronautics Administration [CAA] was solely responsible for managing pilots and flight attendants under quarantine. Now, we will send their information to the house registration system as well, marking them as flight and cabin crew,” Chi said.

The “down to zero” plan, which requires the airline’s pilots and flight attendants to take turns undergoing a 14-day quarantine, would reduce its transport capacity by only 20 percent, Wang said.

To enforce the plan, the airline’s pilots and flight attendants would be divided into safe and high-risk groups, the CAA said.

The safe group would comprise flight and cabin crew who have completed 14 days of quarantine and can enter local communities or be dispatched for flight assignments, it said.

The high-risk group would be flight and cabin crew currently on assignment. Once they finish their job and complete quarantine, they would be moved to the safe group.

Members of the two groups must not have contact with each other and must not be allowed to take flight assignments together, the CAA said.