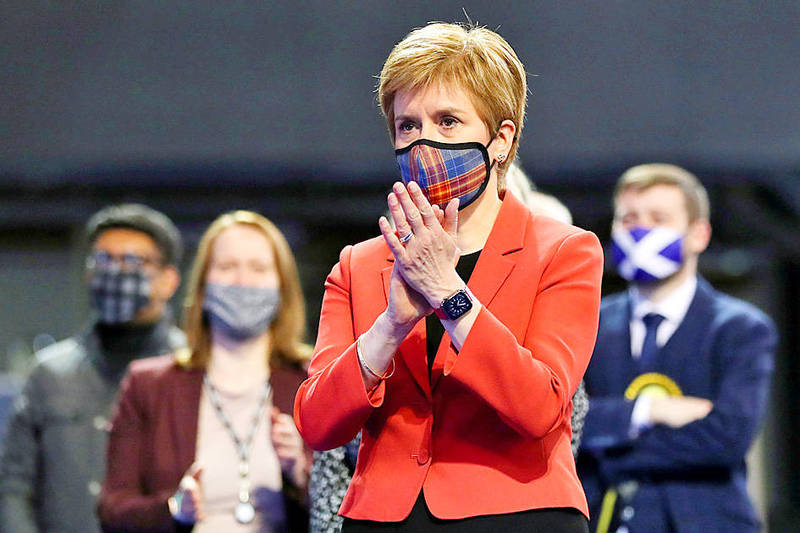 Scottish First Minister Nicola Sturgeon visits a counting center as votes are being counted for the parliamentary election in Glasgow, Scotland, on Friday. Photo: Reuters

The Scottish National Party （SNP） yesterday said its landslide victory in Edinburgh’s devolved parliament was grounds for a fresh independence referendum, despite opposition from London.

While the SNP campaigned on promises to hold a new vote, the British government — which would need to give formal legal permission — is opposed, raising fears of a protracted political and legal battle.

The nationalists say their slightly increased share of seats, one short of an overall majority of 65, gives them a mandate for “indyref2,” so called after the “No” vote in Scotland’s first independence vote in 2014.

Scottish media stressed the SNP’s strong showing, with The Herald yesterday headlining its front page simply with the word “Landslide.”

However, UK-wide newspapers had a different take, as the Sunday Telegraph said that “Sturgeon falls short of majority.”

SNP leader and Scottish First Minister Nicola Sturgeon said in her victory speech that Westminster now has “no democratic justification” to deny a second independence referendum.

“I hope to lead Scotland to independence,” she told the BBC yesterday.

She said that it would be “absurd and completely outrageous” for the referendum to lead to a legal wrangle in the British Supreme Court, as could happen if Westminster blocked it and the Scottish parliament passed its own legislation.

British Prime Minister Boris Johnson has said the 2014 referendum where 55 percent voted “No” should be a once-in-a-generation event.

Johnson on Saturday said that the SNP’s aim of a second referendum was “irresponsible and reckless,” while he wrote a public letter to Sturgeon asking her to “work together” in “Team UK.”

Sturgeon told the BBC that she thought the British government ultimately would not stand against the referendum, because this would come across as disrespectful of Scots’ democratic rights.

“It would mean that the Conservative government had refused to respect the democratic wishes of the Scottish people,” she said. “I think it is an understatement to say that that wouldn’t play well.”

He said in comments to the BBC that for all British leaders, including Sturgeon, the priority is recovery from the COVID-19 pandemic and that the country did not have time now for a “protracted conversation about the constitution.”