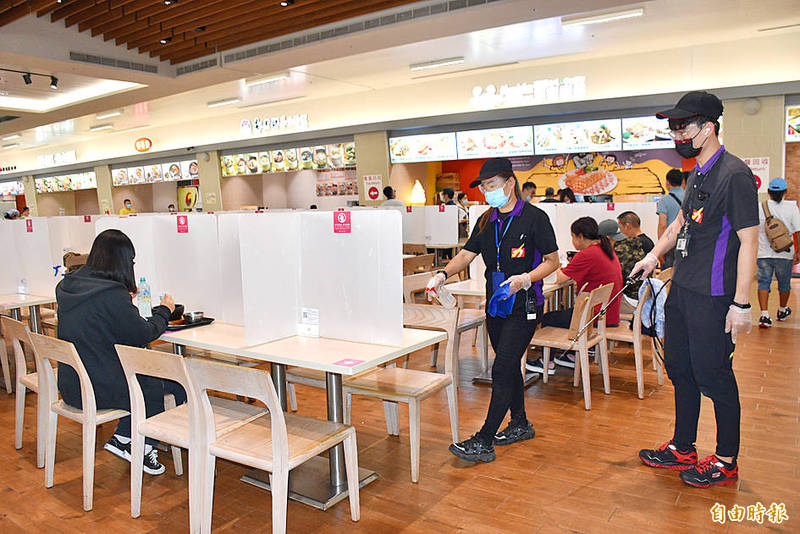 SHOPPING MALL: People who have been to places visited by the confirmed cases at about the same time should pay attention to their health condition and report symptoms

The Central Epidemic Command Center （CECC） yesterday revealed several locations in Taoyuan and Taipei visited by two people confirmed to have COVID-19 when they were likely contagious.

People who visited the venues at about those times should pay attention to their health condition, and should seek medical attention at a designated COVID-19 testing hospital if they develop symptoms before Wednesday next week, it said.

Minister of Health and Welfare Chen Shih-chung （陳時中）, who heads the center, made a correction to information announced on Saturday after police gathered security footage from surveillance cameras to confirm the public locations case No. 1,184 visited last week.

The woman visited a branch of Taipei Fubon Commercial Bank （台北富邦銀行） in Taipei’s Neihu District （內湖） between 10am and 11am on Tuesday, rather than the previously reported 11am on Wednesday, Chen said.

He also provided an update on an expanded polymerase chain reaction （PCR） and antibody testing program of all 1,279 China Airlines pilots, saying that only 21 pilots have not undergone the tests.

Of those, nine are on vacation abroad, six are on unpaid leave, three had been suspended from flying after failing physical examinations, and three were on duty and would be tested today, he said.

The program would end after the tests results from those three pilots come back, he added.

The center is considering temporarily extending the period for identifying close contacts for isolation from two days prior to the onset of symptoms to three days, Chen said, adding that the proposal would be discussed with the center’s panel of specialists this week.

The CECC yesterday reported one imported case of COVID-19 — a traveler from the Philippines.

The traveler is a woman in her 20s who arrived in Taiwan on Thursday to visit a critically ill relative, Chen said.

The woman provided a negative PCR test result from within three days of boarding the plane to Taiwan, quarantined at a hotel and underwent a self-paid test at a hospital on Friday, and the result came back positive, he said.

She also tested positive for antibodies against the novel coronavirus, he added.

Separately yesterday, the Ministry of Foreign Affairs said that two more employees at the Taipei Economic and Cultural Center in India have been confirmed to have COVID-19, adding up to eight confirmed cases at the center, accounting for one-fifth of its employees.

Minister of Foreign Affairs Joseph Wu （吳釗燮） is concerned about the increase in cases at the center, and is discussing and evaluating an emergency preparedness plan, the ministry said.

The ministry would continue to arrange PCR tests for the center’s employees and they would be asked to work from home until Friday, it said.