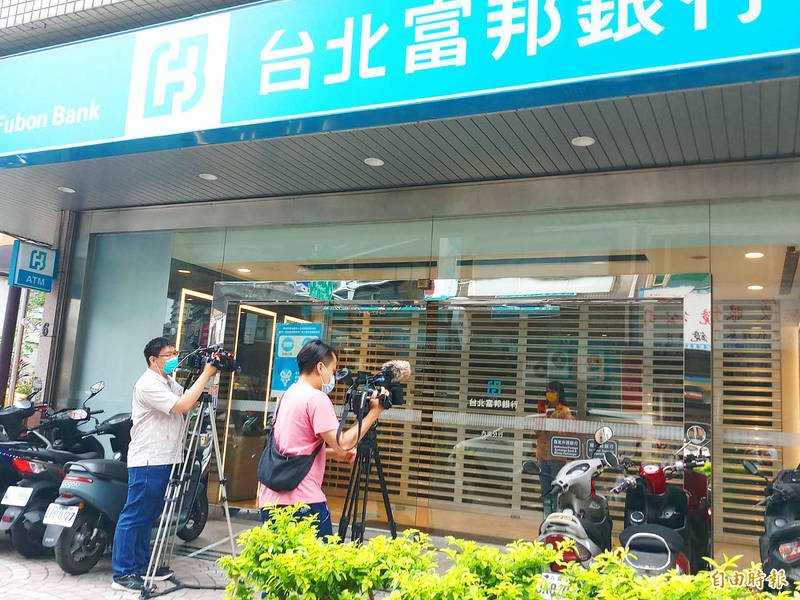 Media workers yesterday set up cameras in front of a Taipei Fubon Commercial Bank branch in Taipei’s Neihu District, which was visited by a woman who tested positive for COVID-19. Photo: Yang Hsin-hui, Taipei Times

DOMESTIC INFECTION LIKELY: A pilot confirmed to have COVID-19 yesterday did likely not contract the virus on the short haul routes he flew, the center said

The Central Epidemic Command Center （CECC） yesterday reported two cases of COVID-19, a China Airlines pilot and his wife, bringing the number of cases linked to a quarantine hotel in Taoyuan to 31.

On Sunday last week, he conducted the flight simulator training, which was attended by case No. 1,153, who was confirmed on Tuesday.

Case No. 1,183 tested negative for the virus and antibodies on April 24, and received the first shot of the AstraZeneca COVID-19 vaccine on Monday last week, Chen said.

The pilot reported feeling tired on Tuesday and having a fever on Thursday, Chen said, adding that he sought treatment on that day and was tested again, and the result came back positive yesterday.

Case No. 1,184 is the pilot’s wife, and her infection is classified as domestic, Chen said.

She tested positive after her husband was diagnosed on Friday, Chen said, adding that contact tracing for the two cases is under way.

Case No. 1,184 visited a branch of Taipei Fubon Commercial Bank （台北富邦銀行） in Taipei’s Neihu District （內湖） at about 11am on Wednesday, he said, urging people who visited the bank at that time to practice self-health management until May 19.

Asked about the source of infection for case No. 1,183, Chen said that it is unlikely that he contracted the virus on the short haul flights to Vietnam and Thailand, and that he was most likely infected by case No. 1,153 during the flight simulation training.

Centers for Disease Control Deputy Director-General Philip Lo （羅一鈞）, who is the deputy chief of the CECC’s medical response division, said that during the training, the pilots were in the same confined space for more than an hour, which made infection likely, despite all participants wearing masks.

Another participant has tested negative, but is under home isolation, Chen said, adding that viral genome sequencing would be conducted to determine the source of infection of case No. 1,183.

The CECC also reported three imported cases, a migrant worker and a sailor from the Philippines, and an Indonesian man who came to Taiwan from the Netherlands for work.