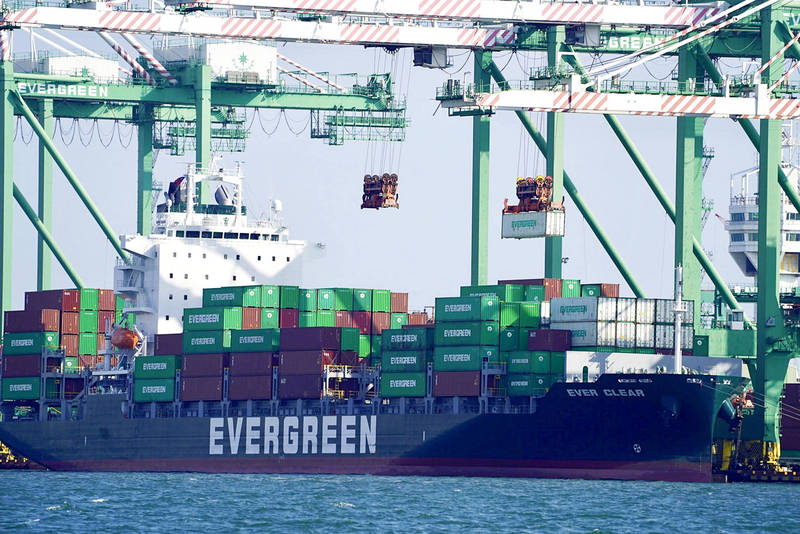 An Evergreen cargo ship is pictured at an unnamed port in an undated photograph. Photo: CNA

FULL SPEED AHEAD: Exports could stay above the US$30 billion mark this month, as material, component and capacity shortages persist, a government official said

Exports last month surged 38.7 percent year-on-year to US$34.96 billion, the second-highest value in history, as local firms benefited from an across-the-board increase in demand, the Ministry of Finance said yesterday.

A pickup in economic activity around the world also lent support to inventory building for tech and non-tech products, pushing up their selling prices, during a historically slow season, Department of Statistics Director-General Beatrice Tsai （蔡美娜） told a news conference in Taipei.

“Exports could stay above the US$30 billion mark for this month, or an increase of 25 to 31 percent from a year earlier,” Tsai said, adding that material, component and capacity shortages could persist until next year, based on the guidance of major tech firms.

Taiwan is home to the world’s leading contract makers of electronics used in smartphones, personal computers, TVs, vehicles, as well as artificial intelligence and Internet of Things applications. The second quarter is usually a low season for technology brands to digest inventory before the launch of next-generation products in the fall.

Shipments of electronics spiked 38.6 percent to US$13.51 billion, propelled by a 34.9 percent increase in semiconductors, a 44.1 percent bump in LEDs, a 35.2 percent pickup in capacitors and a 10.6 percent growth in printed circuit boards, the ministry’s report showed.

Exports of information and communications technology devices expanded 35.9 percent to US$4.71 billion on the back of demand for personal computers and accessories, data storage devices, routers, switches and related products, it said.

The COVID-19 pandemic has accelerated the digital transformation of companies and organizations, while 5G wireless communication and other new technologies are gaining momentum, Tsai said.

The boom extended to non-tech sectors, with chemicals, minerals, textiles, base metals and plastics reporting sweeping comebacks, with growth ranging from 27 percent to 128.8 percent, the ministry said.

Warming global economic activities and a low base last year accounted for the impressive showings, it said.

Meanwhile, imports jumped 26.4 percent to US$28.79 billion, the ministry said.

Imports of capital equipment rose 39.2 percent from a year earlier, while industrial and agricultural raw materials saw an advance of 27.7 percent, it said.

The latest trade figures gave Taiwan a trade surplus of US$6.18 billion, more than doubling the year-ago level, it said.