《TAIPEI TIMES》 ‘Taiwan’ should be on international licenses, DPP says 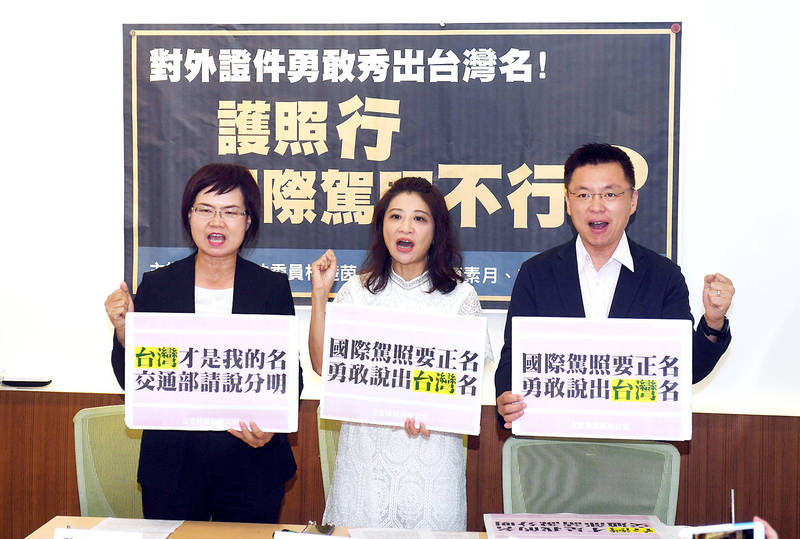 “Taiwan” should be added to international driver’s licenses to emphasize that Taiwanese travelers are not Chinese, Democratic Progressive Party （DPP） lawmakers said yesterday.

DPP Legislator Michelle Lin （林楚茵） told a news conference at the Legislative Yuan in Taipei that she received complaints from members of the public about the licenses.

Travelers were misidentified as citizens of China because the name Taiwan is not on the Ministry of Transportation and Communications-issued documents, Lin said.

“The country’s passport says Taiwan on its cover and there is no reason for the international driver’s license to be different,” she said.

The ministry would not have so many administrative problems were it to make design changes to the licenses, she said, adding: “Correct identification of the nation’s travelers will help secure their proper treatment by authorities.”

DPP Legislator Chen Su-yueh （陳素月） said the French parliament and the G7 Council of Foreign Ministers separately voiced support for Taiwan’s participation in international organizations over the past two days.

The time is right to restart the movement to rectify the country’s name on international driver’s licenses, Chen said.

“We should make it easier for the international community to identify Taiwan and know that it is different from China,” she said.

DPP Legislator Chao Tien-lin （趙天麟） said that global support for Taiwan is growing, as is the realization that Taiwan and China are different countries.

There is no obstacle in international law that prevents the ministry from putting Taiwan on driver’s licenses, which would avoid misunderstandings for Taiwanese in foreign countries, he said.

Department of Railways and Highways official Lee Chao-hsien （李昭賢） said that the ministry agrees with the proposal to change the licenses, but it must consult other government departments before taking any action.