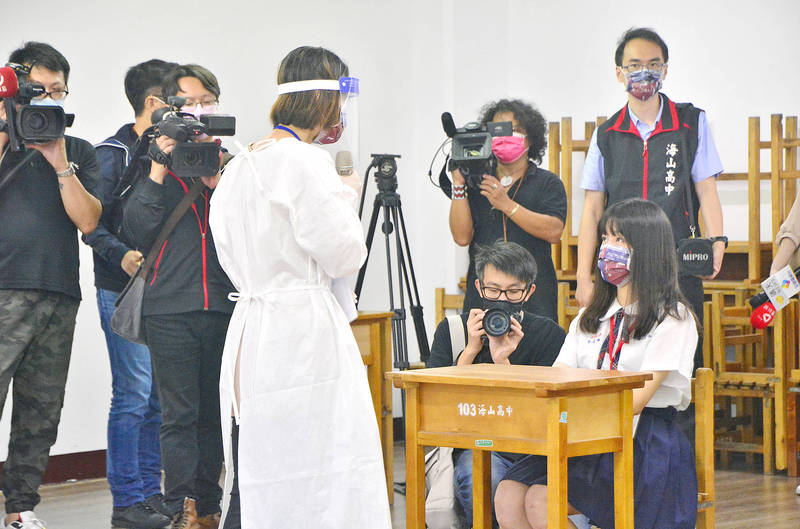 An exam proctor wearing personal protective equipment supervises a student of Haishan High School in a New Taipei City Education Department drill yesterday simulating what to do during an examination if a student is found to have a fever. Photo: CNA

UP TO TWO DAYS: Minister of Health and Welfare Chen Shih-chung said that most who got the shot and felt discomfort only felt ill for the first two days

Employees can ask for unpaid COVID-19 vaccination leave, from the day of their shot until the end of the next day, the Central Epidemic Command Center （CECC） announced yesterday, adding that the policy takes effect immediately.

“The policy of unpaid COVID-19 vaccination leave will be implemented starting on May 5, and all workers and civil servants will be eligible,” Minister of Health and Welfare Chen Shih-chung （陳時中）, who heads the center, told a news conference.

Leave can be taken on the day of vaccination and if recipients feel discomfort after getting the shot, they can extend the leave to all of the next day, he said.

“People only need to provide their COVID-19 vaccine record card to apply for the leave,” Chen said, adding that they would not need to provide a medical certificate or other documents as evidence.

“Employers will not be allowed to deny workers’ applications, or count the leave as an absence or another type of leave, and they are not allowed to withhold an applicant’s perfect attendance bonus, dismiss the applicant or impose other punishments on the applicant,” he said.

“Government agencies will not be allowed to refuse civil servants’ leave applications, or let the leave affect an applicant’s performance evaluation score, or impose other types of punishment on the applicant,” Chen added.

Most of those who have gotten vaccinated and felt discomfort only reported feeling ill during the first two days, so the leave covers two days, Chen said, adding that other forms of leave would need to be used to extend beyond two days.

Employers are not required to offer paid leave, but the center would “of course be thankful” if employers did pay their workers during the leave, Chen said.

The policy, which encourages people to get vaccinated to boost the effectiveness of disease prevention in Taiwan, resulted from discussions among the Ministry of Labor, the Directorate-General of Personnel Administration, the Ministry of Justice, and the Ministry of Civil Service, the center said.

As 199,200 doses of the AstraZeneca vaccine are to expire on May 31, more than 8,000 doses must be administered daily, Chen said, adding that vaccine eligibility is certain to be expanded.

More self-pay doses are to be released — 20,000 have been released — so that the program can continue without stopping, Chen added.

As previously announced, a batch of the Moderna vaccine is to arrive this month, Chen said, adding that although the center does not have an arrival date, it has not been informed of a delay.

The Moderna vaccine has been given Emergency Use Authorization by the Food and Drug Administration, he added.

Taiwan had no locally transmitted cases of COVID-19 yesterday, Chen said, but there were seven imported cases: a female worker from the Philippines; two fishermen, a female student and a male student from Indonesia; a Japanese businessman; and a Taiwanese man who had been working in the US.