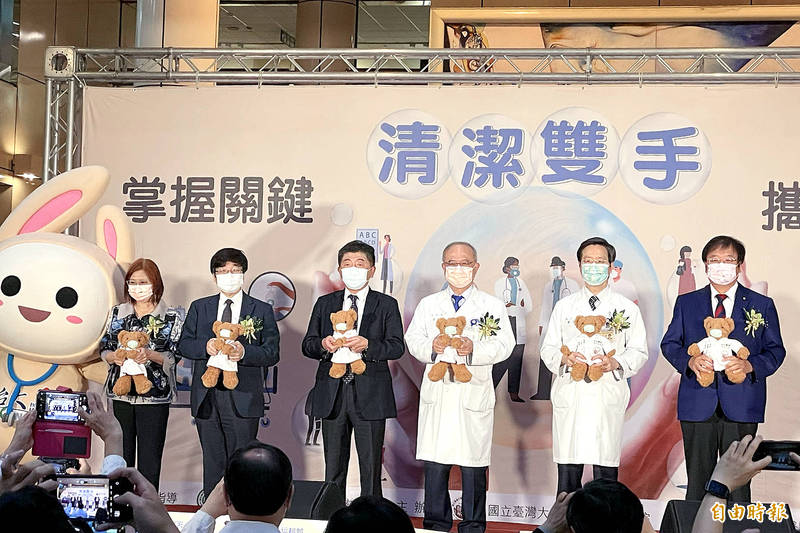 BENEFITS: A CECC official said that masks, handwashing and social distancing have reduced flu, enterovirus infections and diarrhea-related illnesses over the past year

Infectious-disease specialists yesterday urged people to wash their hands thoroughly and frequently to prevent infectious diseases, as there is an increased risk of community spread of COVID-19 after cases linked to China Airlines personnel and people quarantined at the Novotel Taipei Taoyuan International Airport hotel.

Minister of Health and Welfare Chen Shih-chung （陳時中）, who heads the Central Epidemic Command Center （CECC）, said that the infections linked to the airline and the hotel have increased the risk that the virus will spread locally.

“People should wear a mask, wash their hands thoroughly and get vaccinated to build a line of defense,” Chen said, adding that these measures can effectively protect society.

NTU Children’s Hospital dean Huang Li-min （黃立民）, who is also honorary chairman of the Infectious Disease Society of Taiwan, said that the COVID-19 cases linked to the airline and the hotel pose a greater risk to local communities than did an outbreak at Taoyuan General Hospital in January.

Confirmed cases so far include airline crew members and hotel employees, and their family members, which can be considered the first degree of local transmission, Huang said.

The second stage would be confirmed if cases are found among people who are not close contacts of previous cases, he said, adding that preventing a local outbreak is crucial.

The cases linked to the Taoyuan General Hospital cluster infection were detected relatively early compared with the airline and hotel situation, with pilots who have tested positive possibly contracting the disease two to three months prior to being tested, so it is hard to tell whether crew members transmitted the virus to hotel employees, or vice versa, he said.

As some of the recent cases had only mild symptoms, they visited many places in Taiwan, so it is difficult to track everyone who was potentially exposed to them, Huang said.

The CECC has published a list of public spaces that confirmed cases visited when they were likely contagious, but people should not be overly concerned if good personal hygiene is being practiced, he said.