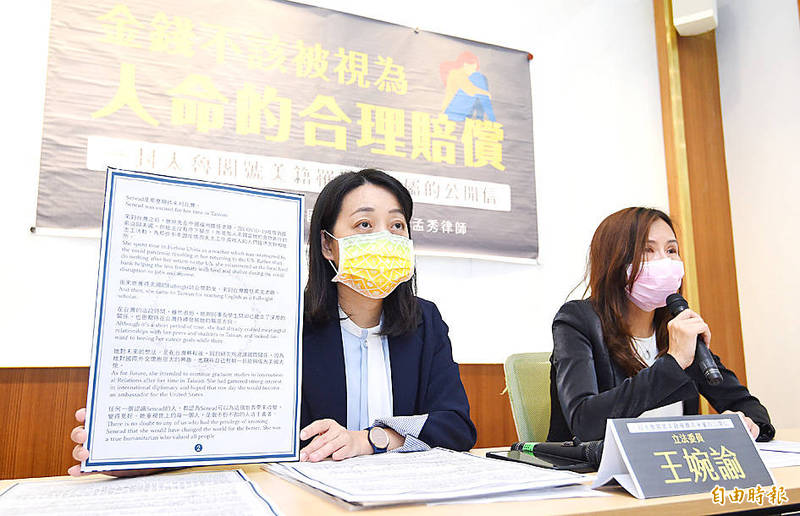 TIME FOR CHANGE: Kent and Joy Short said they are taking legal action to push the TRA to ensure people’s safety and to set up a foundation in honor of their daughter

The parents of American Senead Short, who died in the Taroko Express No. 408 derailment last month, yesterday said in a pre-recorded video that they are seeking more compensation from the Taiwan Railways Administration （TRA）, citing the “gross negligence” that led to the death of their daughter.

Compensation from the railway agency should be used to set up a foundation in honor of their daughter and ensure the safety of the TRA system, Kent and Joy Short said.

The 24-year-old Iowan, who taught English as a Fulbright award winner in Taiwan, was one of 49 people killed in the accident in Hualien’s Sioulin Township （秀林） on April 2.

“As we know, Taiwan Railways will make a compensation payment of NT$15 million [US$536,116]. We also learned that Taiwan’s Ministry of Health and Welfare will distribute donations in the amount of NT$15 million to the families of 49 people who were killed in this train crash,” Joy Short said in the video.

“The people of Taiwan have been very supportive to the victims of this tragedy. For this we are truly grateful... However, we are concerned that in this tragedy, the interests of Taiwan Railways appear to have outweighed the safety of the people,” she said.

“We brought legal actions precisely for the purpose of ensuring the safety of Taiwan Railway’s operations and preventing other tragedies in the future,” she said.

While recognizing that the compensation is no small amount of money, Joy Short said it should never be considered appropriate compensation for their daughter’s life.

Citing the investigation report on the derailment of a Puyuma Express train that claimed 18 lives on Oct. 21, 2018, which showed the incident was caused by excessive speed and an inactive train protection system, Kent Short asked whether the issues were fully addressed or resolved prior to the tragedy that claimed their daughter’s life.

“Even before that, did Taiwan Railway ever implement any corrective measures following the incident dating back to 1981? Has Taiwan Railways resolved these issues?” he asked. “If not, wouldn’t such failure justify an even higher amount of compensation by Taiwan Railways?”

On March 8, 1981, a Tzuchiang Express train hit a gravel truck at a railway crossing, killing 30 passengers and injuring 130.

“We are not interested in financial gain for our own use and for any compensation. In fact, we believe that compensation for Taiwan Railways’ gross negligence should be used to establish a foundation in honor of Senead towards helping people around the world,” he said. “This is what she would have wanted, and in fact was the way she had been living her life.”

Pursuing a higher amount of compensation is the only way to push Taiwan Railways to ensure people’s safety, the Shorts said.

“The last thing we want to see is for any other parents in this world to suffer from such tragedy and forever struggle through the life of pain without one’s beloved,” they said.

In the video, the Shorts also remembered their daughter as an artist, a ballet dancer, a linguist who spoke French, Arabic and Mandarin, an honor student, a reader and a world traveler.

Senead Short had intended to continue graduate studies in international relations after her time in Taiwan, as she had gained a strong interest in international diplomacy and hoped one day that she would become an ambassador for the US, they said.

Chen, who has been retained by the Shorts to handle legal proceedings, said that prosecutors are investigating evidence related to criminal lawsuits, but the railway agency is also facing civil lawsuits that would determine the amount of compensation given to the victims.

“Taiwan should never forget those killed or injured in the fatal accident. We should continue overseeing the TRA so that it properly handles the aftermath of the derailment and thoroughly reforms its operations,” she said.