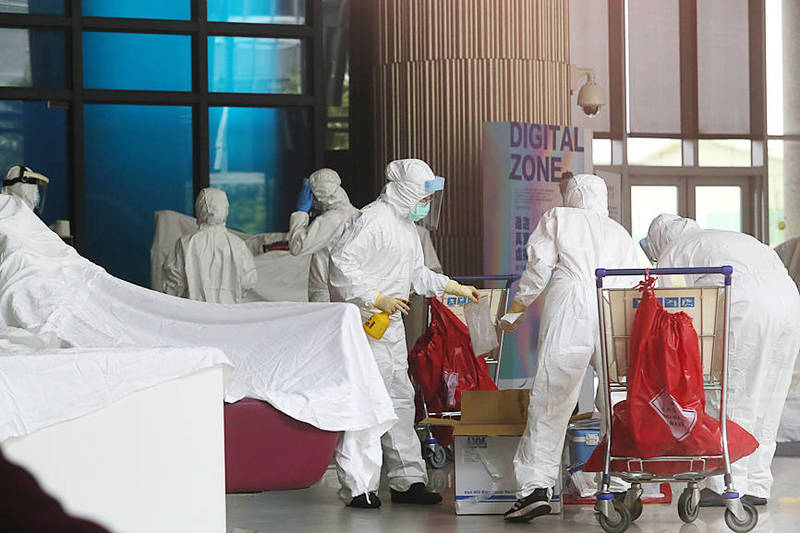 TESTING: Viral genome sequencing suggests an infection chain among the recent pilot and hotel worker cases, but the hotel’s air-conditioning was apparently not to blame

The Central Epidemic Command Center （CECC） yesterday reported one locally transmitted COVID-19 case, while viral genome sequencing has suggested a link between China Airlines （華航） pilots, their family members and workers at a quarantine hotel who contracted the virus.

Since April 20, 10 China Airlines cargo pilots have tested positive for COVID-19, including one in Australia. The sources of infection have not been established.

Minister of Health and Welfare Chen Shih-chung （陳時中）, who heads the center, said that the new local case is a five-year-old boy — the son of an infected pilot.

“The pilot [case No. 1,102] usually stayed at Novotel for quarantine, but because of a sudden change in his flight schedule, he stayed at home for quarantine after the last flight he flew” before testing positive, he said.

The boy was placed under home isolation on Sunday last week, as soon as his father tested positive, Chen said, adding that he was tested after experiencing a fever on Thursday.

Two other family members have been placed under home isolation until May 15, he added.

All Novotel workers and guests were moved to centralized quarantine facilities and tested on Thursday, after a hotel staff member — case No. 1,120 — tested positive for COVID-19.

Centers for Disease Control Deputy Director-General Philip Lo （羅一鈞）, deputy chief of the CECC’s medical response division, said that only case No. 1,120 tested positive in both the polymerase chain reaction and antibody tests, indicating that among the hotel’s staff members, case No. 1,120 contracted the disease first.

“Among seven cases in which we have completed viral genome sequencing, the latest case — case No. 1,120 — was found to be infected with the same strain as five previous cases” — four pilots and a pilot’s family member, Lo said. “They were infected with the UK variant B.1.1.7 and shared the same viral sequence.”

“We can infer that there might have been cross infection between the pilots and the hotel staff members,” he said.

Lo said three of the four infected pilots had stayed at Novotel, and the onset of their symptoms was close to that of case No. 1,120, whose work area covered the rooms in which the pilots had stayed.

“Further investigations are needed to clarify how the virus was transmitted among them or how they were exposed to each other, but ... the evidence suggests that there may have been an infection chain among them,” he said.

Lo said that the pilots did not stay in rooms near each other, and the air-conditioning in their rooms was not connected.

Experts have inspected the hotel and the center believes they were not infected through the air-conditioning system, he said.