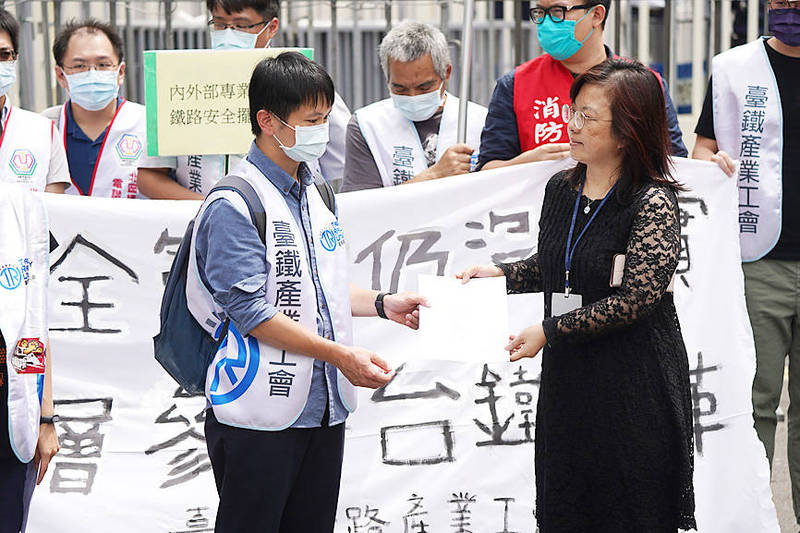 Outside experts should monitor reforms at the Taiwan Railways Administration （TRA）, the Taiwan Railway Labor Union said in Taipei yesterday, as today marks the one-month anniversary of a deadly Taroko Express train crash.

On April 2, Taroko Express No. 408, traveling from New Taipei City to Taitung, derailed as it entered the Cingshuei Tunnel （清水隧道） in Hualien’s Sioulin Township （秀林） after it hit a crane truck that had slid down a slope from a work site onto the rails. Forty-nine people died and more than 200 were injured, making it the nation’s most devastating railway accident in decades.

About a dozen union members and their supporters protested in front of the Executive Yuan, calling for oversight of TRA reforms.

The heads of the administration and the Ministry of Transportation and Communications were replaced after the accident, but reform plans seem unlikely to solve the daily problems faced by frontline employees, union secretary-general Wei Yu-ling （魏豫綾） said.

To improve safety standards, the Executive Yuan should bring in a third-party company to oversee the reforms, instead of allowing TRA officials and employees to tackle the problems on their own, Wei said.

While the Executive Yuan plans to reorganize the ministry as the “Ministry of Transportation and Construction,” it seems that would only increase the number of office sections and leaders inside the agency, union member Hsu Chung-neng （徐仲能） said.

If the ministry is really determined to advance railway safety, it should invite outside experts to monitor the reform, rather than simply increasing the number of official positions, he said.

The government should invite experts to form a Cabinet-level task force to help the TRA inspect its existing work procedures, equipment and personnel distribution, so it can uproot the problems that make the nation’s railway system lag behind other transportation industries, the union said.

The union also urged the government to heed the opinions of frontline employees and allow union members to participate in the reform process.

Instead of creating more penalties for contractors, the government should improve the mechanisms for reporting objects falling on railways, the training and allocation of employees, and safety inspection procedures, it said.