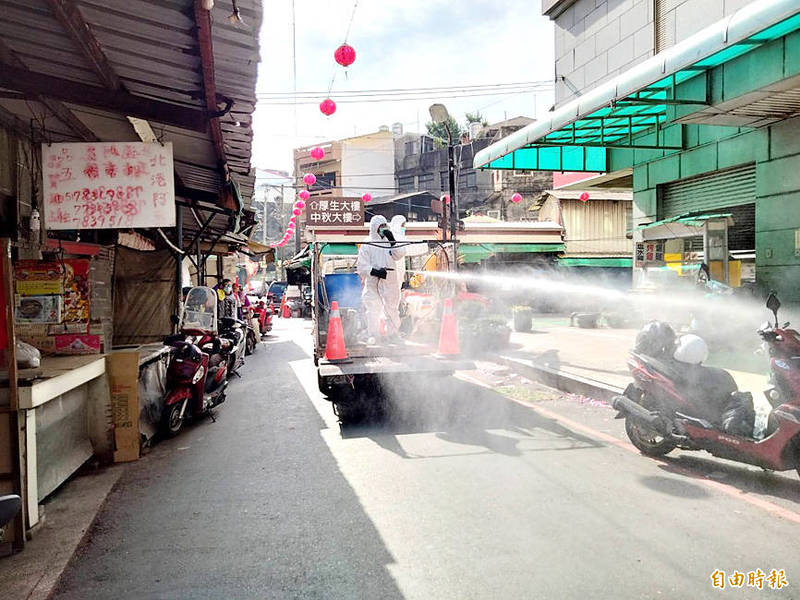 TRAVELING WHILE CONTAGIOUS: The highest risk of infection is indoors, especially in settings where people take off their masks to eat and drink, an expert warned

The Central Epidemic Command Center （CECC） yesterday posted a list of places visited by people who were recently diagnosed with COVID-19 while they were likely contagious, urging people who visited the sites at the same time to practice self-health management.

Minister of Health and Welfare Chen Shih-chung （陳時中）, who heads the center, said that confirmed case No. 1,129 — a woman in her 60s who works at Novotel Taipei Taoyuan International Airport, a designated quarantine facility, and tested positive on Friday — visited Chiayi between Friday last week and Monday.

On the first day of her trip, she visited the Big Chiayi De Turkey Rice restaurant （大嘉義得火雞肉飯） in Jhongpu Township （中埔） from 1pm to 1:40pm and the Alishan Yeouu Campground （阿里山小森林農園露營區） from 3:10pm to 3:40pm, Chen said.

On Saturday last week, she visited the Alishan National Forest Recreation Area （阿里山國家森林遊樂區） from 4am to 6:45am, where she took the Alishan Forest Railway to see the sunrise, Chen said.

Chen said that a few locations and details have been added to the list of places visited by case No. 1,127, a woman in her 20s, and case No. 1,128, a man in his 20s, who also work at the quarantine hotel and tested positive on Friday.

The woman on Tuesday last week visited the Mr Sandwich restaurant in Taoyuan’s Jhongli District （中壢） from 6:20am to 6:40am, and hypermarket RT-Mart’s Jhongli branch from 6:20pm to 6:35pm, he said.

He stayed at the terminal from 1:30pm to 2pm and took a Taoyuan MRT train to Airport Hotel Station between 2pm and 2:20pm, Chen said.

On Wednesday, he took an Orange Bus on route 703 from Guolin Station to Jhongli Railway Station from 10:20am to 11:20am, Chen said, adding that he took a bus on the reverse route at about 2:30pm.

“The CECC urges people who have visited these locations at about the same time to practice self-health management and call the 1922 hotline to contact the local health department if they experience any symptoms associated with COVID-19,” Chen said.

The highest risk of infection is in restaurants, cafes and nightclubs, she said, citing medical reports.

She urged the authorities to investigate whether social distancing was enforced at the locations case No. 1,129 visited.

People usually take off their masks in restaurants, cafes and nightclubs, and if they have been at one of those places at the same time as an infected person, they might have been at high risk of infection, Chiu said.