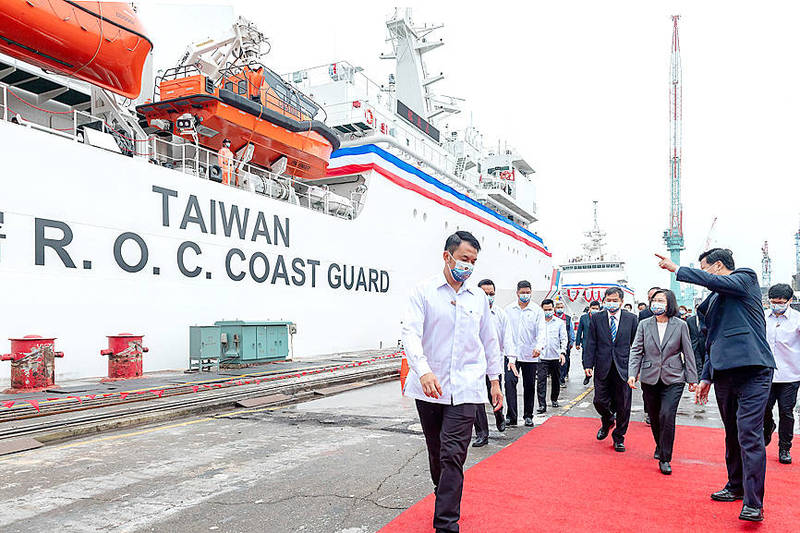 President Tsai Ing-wen （蔡英文） yesterday presided over a ceremony in Keelung to inaugurate a 4,000-tonne-class coast guard ship, named the Chiayi （嘉義）, while highlighting the coast guard’s cooperation with the US.

Tsai toured the Chiayi at CSBC Corp, Taiwan’s （台船） shipyard and attended the christening of its sister vessel, the Hsinchu （新竹）, both commissioned by the Coast Guard Administration （CGA）.

Tsai said that the delivery of the Chiayi and the production of sister ships bolsters the coast guard’s capabilities and offers greater protection for CGA staff.

The Chiayi and the launch of the navy’s Yu Shan （玉山） amphibious transport dock two weeks ago in Kaohsiung are proof that the government’s indigenous shipbuilding projects and increased national defense autonomy is on track, Tsai said.

Last month, Taiwan and the US signed a memorandum of understanding for the nations’ coast guards to collaborate in preserving maritime resources; reducing illegal, unreported and unregulated fishing; and allowing for joint maritime search-and-rescue missions, as well as environmental response events, she said.

Although a 4,000-tonne-class vessel, the Chiayi has almost 5,044 tonnes of displacement, and could sail for 10,000 nautical miles （18,520km） before needing to refuel, CSBC president Cheng Wen-lon （鄭文隆） said.

Designed as a mobile seaborne field hospital, the ship is outfitted with a negative-pressure isolation ward, an operating room and other facilities that would enable it to perform humanitarian relief and search-and-rescue missions, Cheng said.

The ship also has a landing pad for rotary-wing aircraft, he added.

Su Tzu-yun （蘇紫雲）, a research fellow at the Institute for National Defense and Security Research, said that the ship could also be retrofitted for combat.

Based on the design of the US Coast Guard’s Legend-class National Security Cutter, the Chiayi follows the “blue-water navy” concept, meaning that it is capable of operating globally, Su said.

The vessel is close to the size of a navy ship and is equipped with 70mm rockets, 20mm cannons, a water cannon with a range of 120m and an air pad capable of launching uncrewed aerial vehicles, Su said, adding that in a conflict, it could be used against landing craft or enemy naval vessels.

The US and Japan have laws that allow coast guard ships to be retrofitted for combat, Su said.

The CGA said it remains in negotiations with CBSC to head efforts to construct ships, and handle maintenance and repairs.