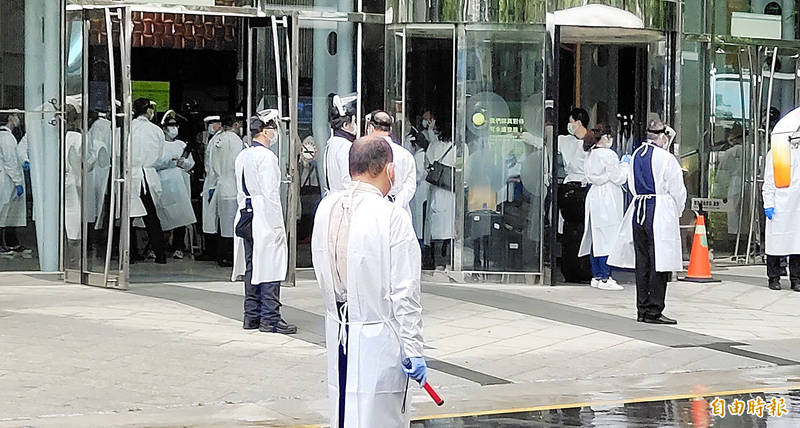 TAKING PRECAUTIONS: With the possibility of person-to-person transmission, the government has activated the highest level of containment measures, the CECC said

A newly confirmed COVID-19 case might indicate person-to-person transmission within a Taoyuan hotel, the Central Epidemic Command Center （CECC） said yesterday, as 412 people were moved from the facility to government quarantine centers.

The center announced three more cases linked to China Airlines Ltd （CAL, 華航）, two of which were domestically transmitted, while the source of the third is unknown.

One of the domestic cases is a senior housekeeping employee at Novotel Taipei Taoyuan International Airport, where many CAL flight crew members stay for quarantine after arriving in Taiwan, the CECC said.

The man in his 40s developed symptoms on April 17 and sought treatment at a clinic three times from Monday last week to Monday, but his condition did not improve, it said.

On Tuesday, he went to a local hospital, where he was diagnosed with pneumonia, and he tested positive for COVID-19 yesterday, the CECC said, adding that he is in an intensive care unit.

The man was in charge of checking the cleanliness of the rooms and helped deliver items to people in quarantine there, said Minister of Health and Welfare Chen Shih-chung （陳時中）, who heads the CECC.

The man reportedly wore a mask and gloves while on the job, Chen added.

The possibility that he was infected through environmental transmission is minimal, he said, but added that it was possibly spread through contact between cleaning staff.

According to CECC guidelines, after a guest checks out of a quarantine hotel, a team disinfects their room wearing full protective gear, Chen said.

Thirty minutes after the room is disinfected, sanitation workers enter to clean without wearing medical gowns, he added.

If any area was not properly sanitized, it is the second group of cleaners who would face risk of infection, he said.

Yesterday’s confirmed case inspected rooms after they were cleaned by this second group, meaning he likely contracted the virus from a coworker, Chen said.

Three other employees at the hotel have developed fevers and are being tested for COVID-19, two of whom are cleaning staff, he added.

Since there is a possibility of person-to-person transmission, the highest level of containment measures have been activated, Chen said, meaning that all 412 people at the hotel have been moved to government quarantine centers.

Of them, 207 are employees, 109 are Taiwanese pilots and 76 are foreign pilots, while the rest are visitors, he said.

After the hotel is emptied at about 5pm today, it is to be inspected and fully disinfected, Chen added.

The other new domestic case is a Taiwanese woman in her 40s, who is the wife of a CAL pilot who tested positive on Tuesday last week, the CECC said.

The third case linked to CAL is a Taiwanese cargo pilot in his 50s, who returned from the US on Sunday and tested positive during quarantine after he developed symptoms.

With the confirmation of the three new cases, the number of COVID-19 infections linked to CAL has increased to 16.

The center has not yet determined how the pilots were infected, it said.

The CECC also reported two new imported infections, bringing the total number of confirmed cases to 1,121, of whom 1,051 have recovered, 12 have died and 58 are in hospital.