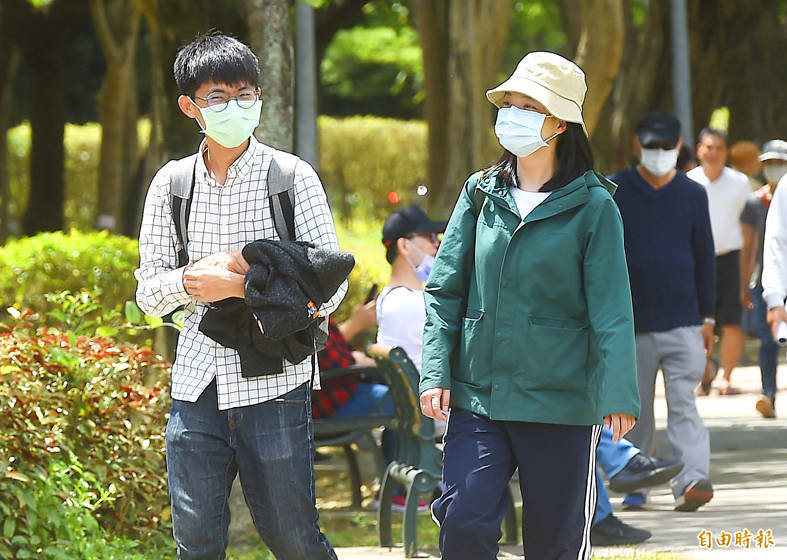 People wearing masks on Saturday walk along a path in Daan Forest Park, which is near the Taipei Grand Mosque in Taipei’s Daan District. Photo: Chien Jung-fong, Taipei Times

The Taipei City Government yesterday said that it would allow the Eid al-Fitr celebrations next month at the Taipei Grand Mosque to proceed, but would not rule out canceling them if the COVID-19 situation worsens.

Taipei Deputy Mayor Vivian Huang （黃珊珊） announced the decision after three people with COVID-19 were confirmed to have attended an event at the mosque on April 16.

The Central Epidemic Command Center （CECC） on Friday last week announced the three cases — two China Airlines cargo plane pilots and one of the pilots’ son — and said they had joined the event, which was attended by more than 400 people, and stayed for an hour between 12pm and 1pm.

The Taipei Grand Mosque did not require attendees to leave their contact information.

However, it did provide a list of more than 100 attendees at the event, Huang said, adding that the city government has contacted more than 70 people, including two who reported having symptoms, but tested negative for COVID-19.

After discussing it with Taipei Mayor Ko Wen-je （柯文哲）, the city government decided to allow the Eid al-Fitr celebrations next month to proceed, Huang said.

However, the city could change its decision, depending on the latest COVID-19 developments, and would not rule out canceling the event, she added.

Asked to comment on National Taiwan University of Science and Technology asking 65 teachers and students who attended the April 16 event to perform enhanced self-health management and not enter the school campus until Friday, Huang said: “I was also shocked when I saw the news.”

The CECC did not inform the Taipei Department of Health about it, she said, urging it to inform the city whether it needs to carry out contact tracing or other measures.

Addressing Huang’s concerns, Minister of Health and Welfare Chen Shih-chung （陳時中）, who heads the CECC, said at a separate event that, according to the law, when a person is suspected of having COVID-19, the local health department should arrange for the person to be tested and report the results to the center.

The CECC would then inform the local health department about the test result — if it is positive, the department should immediately start contact tracing and report the information back to the center, he said, adding that the center would decide whether public spaces that the confirmed cases had visited should be publicized.

Cooperation between the central and local governments is important in preventing the spread of COVID-19, Chen said, adding that the 65 teachers and students were only asked to practice self-health management, not placed under home isolation.

Huang also said that a Kuwaiti man who had left a hotel in Taipei during his sixth day of quarantine to attend a triathlon in Pingtung County’s Kenting （墾丁） area and was detained at the venue on Friday could be fined at least NT$300,000.

As the man had allegedly lied by saying he was a short-term business traveler who had gained approval for a shorter quarantine period, the city would ask quarantine hotels to double check before allowing guests to leave, she said.