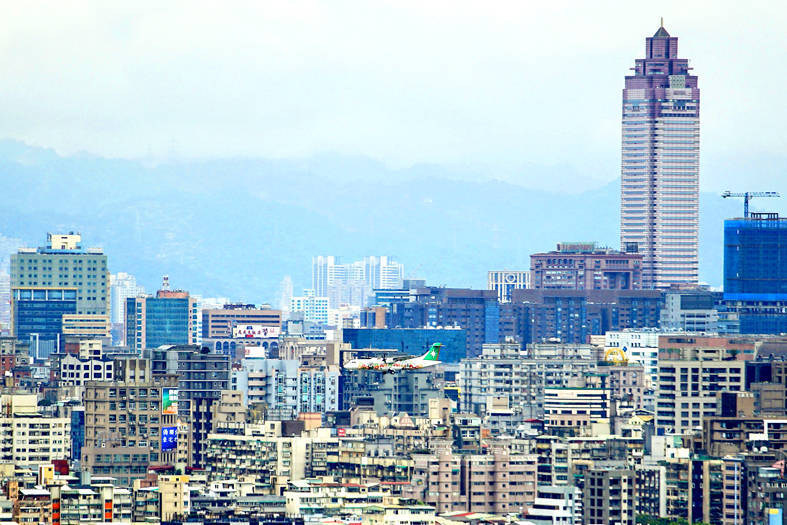 A plane flies over residential and commercial buildings in Taipei on April 9. Photo: CNA

The nation’s housing loans and construction financing last month increased month-on-month and year-on-year, despite two waves of credit controls that were aimed at cooling the market, data compiled by the central bank showed yesterday.

Home loans rose 9.25 percent year-on-year to a 14-year high of NT$8.19 trillion （US$292.93 billion）, while construction lending grew 17.79 percent to NT$2.54 trillion, the central bank said in a statement, adding that more time might be needed for credit controls to work.

The mortgage balance increased by NT$55.6 billion month-on-month, accelerating from a gain of NT$26.19 billion in February and the highest in 49 months, the central bank said.

A shorter month in February and a lower comparison base in March last year because of the COVID-19 outbreak lent support to last month’s strong showing, the central bank said.

A favorable base effect accounted for significant increases in property transactions in the six special municipalities last month, it said.

The central bank said that was disappointed, as it had expected signs of a slowdown last month after cutting loan-to-value ratios in December last year and last month.

Central bank Governor Yang Chin-long （楊金龍） has told lawmakers that he plans to introduce further tightening measures to rein in the market.