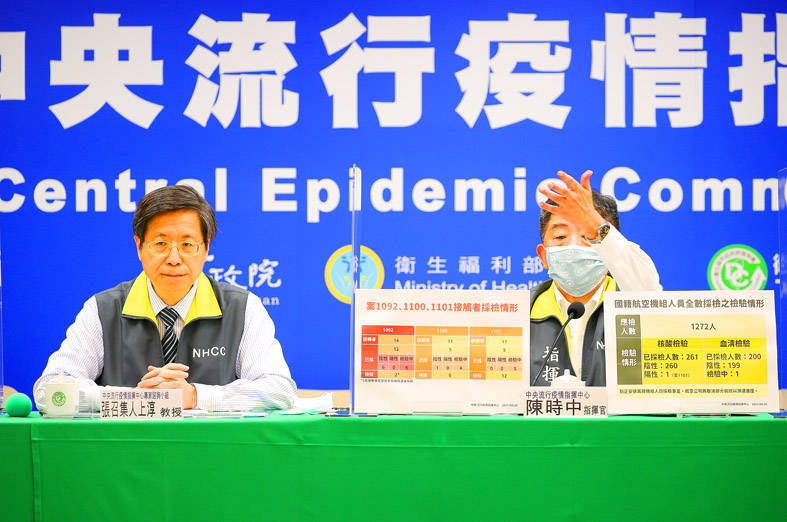 SCREENING: Both pilots had low cycle threshold values, while one of them produced conflicting PCR test results and further testing might be needed, Chen Shih-chung said

Two more China Airlines （CAL, 華航） cargo pilots have been diagnosed with COVID-19, adding up to seven pilots diagnosed with the virus over the past week, the Central Epidemic Command Center （CECC） reported yesterday.

Minister of Health and Welfare Chen Shih-chung （陳時中）, who heads the center, said that one of the new cases — No. 1,100 — is a Taiwanese man in his 50s.

He tested positive during a screening of the close contacts of a case reported in Australia — an Indonesian CAL pilot, Chen said.

Case No. 1,100 flew to the US on April 13 and left on April 17. He quarantined at home for three days after arriving in Taiwan on April 18 and tested negative upon ending quarantine on Wednesday, Chen said.

The pilot was on Thursday recalled for a polymerase chain reaction （PCR） test as a close contact of the case in Australia, and the result came back positive, but with a cycle threshold （CT） value of 36, indicating a low viral load, he said.

He tested negative for antibodies against COVID-19, and another PCR test on Friday came back negative, Chen said.

More testing might be needed to clarify the conflicting PCR test results, which changed from negative to positive and back to negative in three days, he said.

The other new case — No. 1,101 — is a Taiwanese man in his 30s who flew to Germany with three other crew members on April 18, stayed in a hotel during layover and returned to Taiwan on Thursday.

After completing three days of quarantine, he tested positive on Saturday, with a CT value of 28 in the first test and 34 in the second test, Chen said.

The pilot tested negative for COVID-19 antibodies, he said.

The sources of infection in both cases are being investigated, while contact tracing and testing are being conducted, he added.

CAL on Saturday began an extended testing program to screen all of its 1,272 pilots, Chen said.

Among the 200 pilots tested for antibodies, 199 tested negative and one was waiting for test results.

The testing program is being conducted at the ministry’s Taoyuan General Hospital, and pilots undergoing PCR and antibody tests are also being offered the choice of being vaccinated against COVID-19, he said.

Chen also provided an update about contact tracing and testing for two previous cases of Taiwanese pilots reported on Tuesday.

Among them, 102 tested negative, 32 are awaiting results and 24 have yet to be tested, while four people tested positive: the son and the second Indonesian pilot themselves, as well as case No. 1,092 — another pilot confirmed on Saturday — and case No. 1,100, Chen said.

Asked whether the CECC has conducted environmental surface testing for COVID-19 in CAL’s cargo plane cabins, Chen said no, but added that the center has asked the airline to enhance environmental disinfection inside the planes.

Separately, the CECC reported a new imported case of COVID-19 — a Taiwanese who traveled to Mexico for business in February.