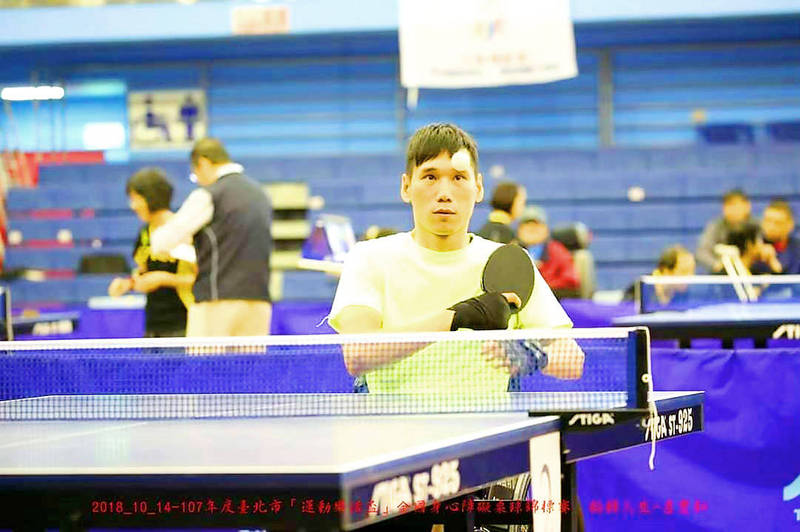 NEW LIFE: Huang Jen-hsiang said before his rehabilitation he wanted to cut himself off from everyone, but realized that he was not alone after visiting a center in Taoyuan

Since his soccer goalkeeping days were cut short by an incident that left him paralyzed, Huang Jen-hsiang （黃仁祥） has found new meaning in helping others, while redirecting his love of sport into a newfound passion for table tennis.

Huang shared his journey back to hope on Saturday as spokesman for the 18th annual charity garden party in Taipei organized by the Spinal Cord Injury Potential Development Center and the Lin Yuh-chi Memorial Foundation.

The Hualien native said that all he used to care about was friends and work; he never imagined that he would one day wake up in a hospital bed, unable to move.

Yet five years ago that is where he found himself, after he was stabbed in the back over a misunderstanding while having some drinks with friends.

From what his sister later told him, he was declared dead twice as paramedics rushed to save his life.

Although he survived, he could not move his body or hands, and needed mechanical assistance to breathe.

Huang said that at the time, while only 31 years old, he thought about giving up on the future, which he believed no longer held promise.

Before the incident, Huang was a well-respected goalkeeper in Hualien.

Ever since he was a child he loved to play soccer and joined nonprofessional teams, even into adulthood, he said.

He would often be put in goal due to his height and had a knack for making all kinds of thrilling saves, he said, adding that he even placed third in a national five-a-side tournament.

Yet after the accident, he said he felt hopeless and wanted to cut himself off from the world, fearing running into people he knew.

With encouragement from his loved ones, Huang after two years finally built up enough courage to seek help in faraway Taoyuan.

“I actually just wanted to go to a place where no one knew me since I felt ashamed, but after arriving at the center and seeing everyone in wheelchairs, I thought: ‘I am not alone,’” he said.

At the Spinal Cord Injury Potential Development Center, Huang said he learned how to rebuild his life from the ground up.

From learning basic things such as how to eat and use the computer on his own, to learning how to drive and other skills, Huang gradually discovered that he could use his own experience to help others like him.

Therefore, after completing his own rehabilitation, he stayed on with the center to help with house calls.

Huang said that it was through serving others with the center that he realized the shortcomings of his own knowledge, so during his free time he began studying at the Department of Healthcare and Social Work at Yu Da University of Science and Technology in Miaoli County.

He said that the combination of his academic and personal experiences have made him better equipped to provide more holistic guidance, adding that he plans to continue his studies after graduation.

However, alongside this newfound calling, Huang’s lifelong passion for sports has not dimmed.

Despite never having played table tennis before, Huang trained tirelessly, winning the bronze medal in the men’s singles at last year’s national championship for people with disabilities.

Finding success in a new sport has helped Huang “rediscover my old self,” he added.