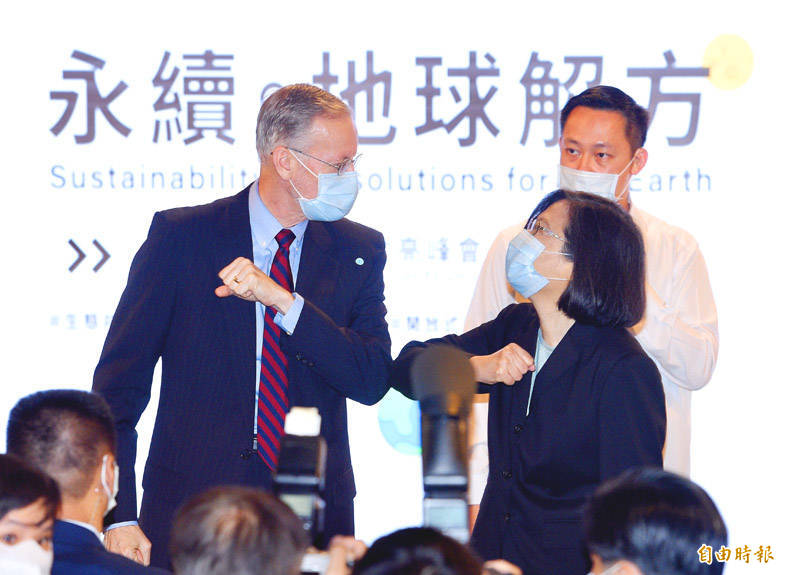 LEGAL REQUIREMENT: The act on greenhouse gas reduction should be amended with the goal to keep pace with the global consensus on climate change, Premier Su said

Tsai made the remarks at an American Innovation Center International Earth Day event hosted by the American Institute in Taiwan （AIT） in Taipei.

Countries that develop new technologies and adopt renewable energy early would be in a good position for the future, she said, adding that Taiwan is undertaking research and development in key areas.

Achieving net-zero carbon emissions by 2050 is a big challenge, Tsai said, adding that many domestic firms see opportunities in the nation’s energy transformation.

Citing the cover story of Time magazine’s newest edition — “Climate is Everything” — Tsai said that Taiwan could not afford to be left behind and must strive to collaborate with other countries on the matter.

“We must own our responsibility and make more efforts to [combat] climate change,” she said.

US President Joe Biden has taken “executive action on tackling the climate crisis at home and abroad by rejoining the Paris Agreement on climate change, committing to build modern and sustainable infrastructure, restoring scientific integrity, and re-

establishing the president’s Council of Advisors on Science and Technology,” he said.

“AIT is also committed to finding solutions. We continue to work with Taiwan to holistically address the impacts of climate change which includes environmental protection and disaster response,” Christensen said, adding that the AIT is increasing support for projects on humanitarian assistance and disaster relief, which are affected by climate change.

Separately yesterday, Premier Su Tseng-chang （蘇貞昌） said during a Cabinet meeting that Article 4 of the Greenhouse Gas Reduction and Management Act （溫室氣體減量及管理法） might be insufficient to keep pace with climate change concerns.

The government should consider amending the act to stay abreast of global efforts to fight climate change, he said.

The article stipulates that Taiwan should by 2050 cut greenhouse gas emissions to less than half the level of 2005.

The goal of net-zero emissions by 2050 is increasingly accepted as a new standard, Su said, adding that Taiwan should follow the example set by other countries.

The Environmental Protection Administration is planning to amend the act, including changing its name to “Climate Change Response Act, and add the net-zero emissions goal, Su said.

Taiwan might face difficulties, but “we must endure ... [and] create a sustainable zero-emission scountry,” Su said.

Climate patterns over the past decade, as well as the current severe water shortage, are indicators that the Earth is damaged, Su said, adding that everyone should contribute to efforts to help the planet recuperate.